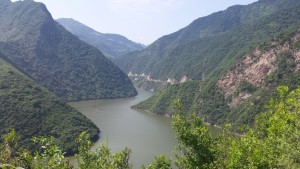 Tuesday, 7th July: Another beautiful ride through great mountain scenery and twisty roads at the start, spoilt only by a stupid error in not parking the bike on the right slope at a view point. The result was that as I started to get off, the bike decided it didn’t like where I parked it so it fell over. Bloody temperamental bugger! Fortunately, no damage, the panniers came to the rescue again. 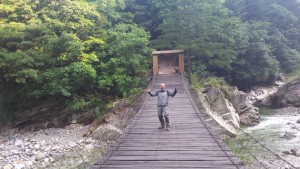 The nearer we got to Xian, the more the traffic built up and the more road works were going on … and the warmer it got. It was very humid and the only way to cool down was to ride bit quicker, making sure the ventilation zips were undone. Nevertheless, by the time we arrived at the beautiful hotel in Xian on Monday evening, we needed a couple of cold beers to cool us down! 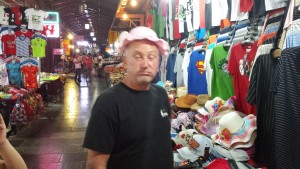 There is a very good street market in the Muslim quarter, only a couple of hundred yards from the hotel and after dinner we took the opportunity to look around it. Despite it being after 9 pm and dark, it was a hive of activity. Presumably the heat of the day discourages people from going out until the cooler evening arrives. That said, cool is relative, especially around this part of China. It was still warm enough to walk around with shorts and still feel hot. 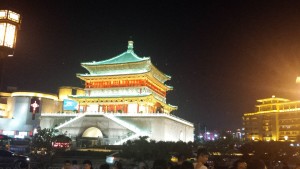 Tuesday morning most of us took up the option of a trip to see the Terracotta Army, a couple of hours drive away by coach. The guide, through her heavily accented English, explained the background to the discovery and the reasons the locals set alight to the excavations. It turned out the the government started taxing the locals to pay for the excavations and they didn’t like it so they took action! 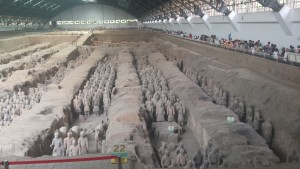 Despite the fascination of the 2000 year old clay soldiers, 4 hours was really more than we needed. It was probably just as well that beer wasn’t available, or we would have needed a few pit stops on the way back to the hotel!

“Offa” a Franco / Irsaeli living in South Africa (and I though I was mixed up!) found a very nice Italian restaurant for the evening as a break from the Chinese food that we would probably be eating over the next few days and the Lasagne and Chianti went down very nicely, thank you.