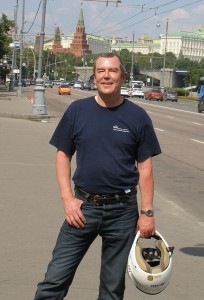 Having joined the Metropolitan Police in 1971 John had an active and varied operational career, including a year with the Territorial Support Group (the “Riot Squad”!) and over 24 years as a supervisor.  At the Poll Tax Riots in 1990, he found himself as Officer in Charge of the first shield officers deployed into Trafalgar Square. The situation called on every ounce of the determination and commitment he had developed over his years of service.

Following his stint with the TSG, John transferred to Streatham where, whilst studying for a degree in IT and computing, he introduced an innovative database to replace the chaotic and antiquated property system. For the last eight years of his police service, John took charge of the rollout teams responsible for installing a new Crime Report Information System (CRIS) across London, and for training the officers who would use it. It was this role that necessitated the use of a motorbike in order to get to central London Police Stations at 5am.

John’s role on the CRIS team gave him considerable experience in project management, particularly planning, scheduling and financial management. An essential part of this particular role was to give presentations to a notoriously conservative workforce, who were very dubious of the new system’s benefits. The target audience included officers up to the rank of Assistant Commissioner. John’s characteristic diplomatic and tactful approach, learned during his 30 years of operational policing, made him an effective communicator and stood him in good stead. After the system went live, John continued to oversee research and development, and represented the Metropolitan Police interest at national level for a proposed nationwide crime reporting system.

Since gaining his motorcycle licence in 1996, John has undertaken advanced rider training with both Police instructors and the IAM, and more recently, in preparation for the Inagh to China ride, John and Brigid have been honing their off-road skills with BMW’s ORS School in Wales.

John retired in 2001 and, with Brigid, took a year out to travel. From London they flew to Boston, where they bought two motorcycles and joined the 2,500-mile, week long, Route 66 Mother Road Rally, at the beginning of a 15,000-mile, three-month, tour of the United States. Thus began a love affair with motorcycle touring.

In 2011, John and Brigid rode from Moscow, Ayrshire, to Moscow, Russia, and back for The Poppa Guttmann Trust at Stoke Mandeville Hospital, successfully raising nearly £15,000 for the charity. John’s commitment to the ride was demonstrated when he and Brigid flew back to the UK from France to attend the unveiling of a statue of “Poppa” Guttmann at Stoke Mandeville Hospital a year later. See www.offonaweeride.com.

Away from work, John is a skilled DIY enthusiast who has renovated two homes and has overseen the building of a third. From a relatively young age, he took an interest in car mechanics and gained the skills and confidence to take on quite large projects, changing a half-shaft on an Austin Metro and a clutch and gearbox on a Ford Escort. More recently he has turned his attention to motorbikes, learning the skills to maintain and repair both his own and Brigid’s bikes, on road and off.

John is an Open University graduate with a B.Sc. Hons in IT and Computing. He is currently working with former police colleagues as a Consultant investigating financial fraud. 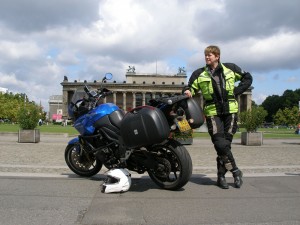 Never one to let lack of experience stand in the way of an opportunity, Brigid may be justly described as ‘infinitely versatile’ or, less favourably, as ‘hard to place’, depending on your point of view.

Whereas John is the pragmatist, Brigid is essentially the artistic half of the partnership. She started her working career in fashion and floristry, before her talents for organisation and English language landed her a series of better paid administrative jobs. She has worked in diverse settings, across a broad spectrum of industries: from assisting the PR Consultant in the day-to-day running of the Corporate Communications department of a publicly-listed biotech company; to co-ordinating a job evaluation programme for an NHS Primary Care Trust, reporting to the Director of Human Resources.

Perhaps the one thing that remains consistent throughout Brigid’s varied roles is her practical, hands-on approach to problems: whether it be swapping out computer components and checking cabling (read ‘crawling around under desks’) as a Network Administrator; or designing and implementing an in-house Recruitment Service, from forms to filing systems. ‘Front-of-house’, Brigid is no stranger to public speaking. She has presented training to sceptical NHS staff, taught children and adults English as a foreign language, and now runs personal style and dressmaking workshops in County Clare.

John’s retirement, and their subsequent move to France, allowed Brigid to indulge her creative talents. She took up photography and painting, joining a foundation course offered by a local art school; the course gave her the opportunity to improve her French. She started writing; her blog kept family and friends up to date with their adventures in France and, more lately, she has taken part in an annual fiction-writing challenge.

Now living in Ireland, Brigid has fulfilled something of a lifetime ambition in starting her dressmaking studio; getting the business off the ground has proved a mighty test of confidence and self-discipline.

Brigid took to motorcycling in 1990, after a transport strike in 1989 brought London to a standstill. It was only in 1996 that John took an interest. Having to be in Central London at sparrow-fart to oversee the various ‘go live’ days during the CRIS computer roll-out, borrowing Brigid’s motorcycle seemed the only practical solution; there was no public transport running at that time of the morning and no possibility of parking the car. The rest is history. At John’s instigation, both he and Brigid have taken every opportunity to improve their riding skills and have toured extensively in the United States and Europe; their first charity ride, from Moscow to Moscow in 2011, raised £15,000 for the Poppa Guttmann Trust at the National Spinal Injuries Centre, Stoke Mandeville.

Brigid is an Open University graduate with a degree in IT and Computing and is a CELTA-qualified teacher of English as a foreign language. She is currently learning Russian.