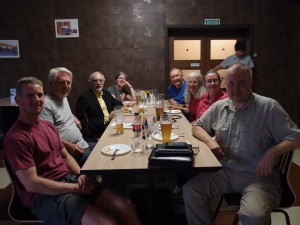 Friday, 17th July: My distress call on the HUBB had also attracted the attention of Ken and Carol Duval, a couple who sold everything to live ‘Life on a Bike’ in 1985 and have been travelling the world ever since! Unluckily for them, but happily for me, they had been stranded in Ulan Ude for a few days, sorting out a tiresome electrical issue. Ulan Ude was my last Russian destination before the Mongolian border, so rather than stay in glorious isolation in the plush Baikal Plaza Hotel in the centre of town, Ken invited me to join them in the less plush, but infinitely more practical (and less expensive), Ayan Hotel on the edge of town.

Once the railway staff had got my bike going, I programmed my new destination into the GPS, and hit the open road. It was warm and sunny and the air around Lake Baikal is scented with pine. As rides go, it was pretty idyllic. The route to Ulan Ude twisted through the forest before revealing a spectacular view of the lake itself at Kultuk, where I refuelled: 95 octane for the bike, and a Twix and Nestea for me! 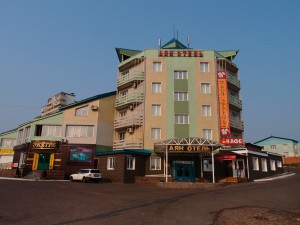 Then the road skirted the lake and turned north-east. I would have stopped for photos, but Russian roads don’t lend themselves to scenic viewpoints, and it would have been hard/dangerous to stop. Indeed, my luck with the road conditions couldn’t last, and soon I was into a lengthy construction zone, where tarmac gave way first to hard-packed sand and then to rough aggregate gravel. The deep layer of stone would have been tricky enough had it been dry but, to try and overcome the level of dust created by passing traffic, they had wet it. It now took on the consistency of thick mud, with large, angular, stones thrown in to test your concentration. Mine lapsed for a moment as I deviated from the tyre tracks created by the cripplingly slow post van in front of me, and I went down.

There was no harm done and two or three construction workers arrived to pick me and the bike up and set me on my way again.

There were no further mishaps, and I arrived at the Ayan Hotel at around 7.30pm. To my surprise, I was greeted by Paul (my HUBB friend from Irkutsk). He and Daniel had endured another day clearing Russian Customs formalities and had left Irkutsk a day late. The dining room was about to close so, before I had even got off the bike, I asked him to order whatever he was having for me, and I’d catch them up after washing my face and hands. 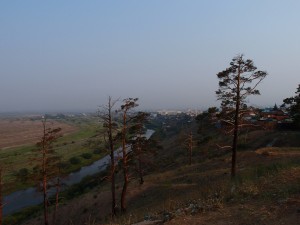 It was a good party. Apart from Paul and Daniel, there were Ken and Carol, a Canadian called Sam, and Lawrence and Kate, a couple travelling in a 4×4. Everyone had a story to tell, but Ken and Carol’s was truly remarkable. They are utterly barking, of course, but charming and very good company.

Paul and Daniel moved on the following morning, but Ken and Carol stayed on an extra day to help Sam with a luggage issue.

On Friday morning, we left for the Mongolian border together, as old friends.