So I bade a rather sad farewell to John and to Russia this morning. I would have given anything to be riding on to China with John. In fact, GlobeBusters’ Director, Kevin Sanders, warned me not to cancel my trip if there was any possibility that my leg would heal in time to meet their group in Kyrgyzstan. But it simply wasn’t to be. As I responded to him, even if I was out of plaster in time, my leg would still be fragile from the break and weak from being immobilised for 5 weeks. It wouldn’t withstand weeks of rough roads, standing on the pegs, and if I had another fall, I would be a liability to the group.  Whatever regrets I might have had, the decision was made and my focus was now to get myself and my bike home.

Ever since we arrived in Moscow, we have been debating what to do about my motorcycle. Strictly speaking, I temporarily imported a motorcycle into Russia, and Customs regulations would normally dictate that it should leave with me. Certainly, that seems to be a commonly-held understanding. However, a quick phone call by Maxim to an ex-Customs Officer friend, was more encouraging. There should be no problem, she said, as long as I declared the bike as “Unaccompanied Baggage”. We then looked at our options for getting it home – possibly shipping to an EU country, or possibly getting one of Maxim’s friends to ride it to the UK. However, as opinions still seemed to be divided about the legalities and – in the current political climate – practicalities of either option, no concrete decision could be made until I spoke to the Customs Officers at the airport.

I arrived, wheelchair-bound and slightly panic-stricken, at the Goods to Declare desk, expecting … Well, to be honest, I’m not sure quite what I was expecting. The patient EasyJet clerk explained my predicament to a bemused Customs Officer, who took my Declaration form and flipped it over. Maxim had taken a quick photo of the front of the form, where the bike’s details were printed. The back of the form was, to all intents and purposes, blank, except for my signature … and an all-important hand-written note, validated with an official Customs stamp, permitting me to keep the bike in Russia until the 8th August! The Customs Officer gave me an almost Gallic shrug and half a smile and handed the form back, gesticulating towards the Green (Nothing to Declare) Channel. 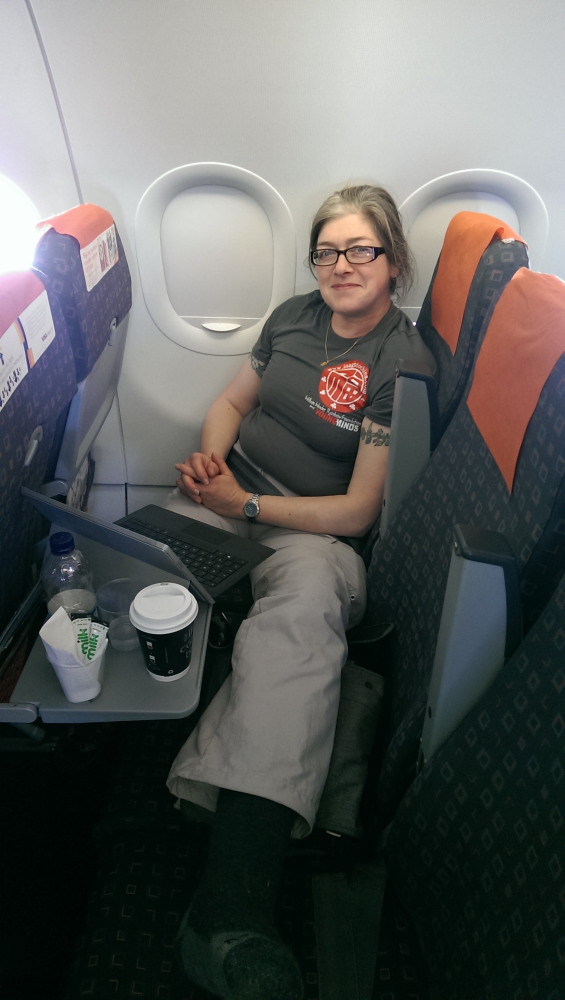 The mistake we had made was to assume that the date of departure that we had put on our Entry forms at Russian Border Control, had anything to do with the Customs Declaration that we made after our visas had been checked and validated by Passport Control. So, while all along we had assumed that the bikes had to leave Russia with us on 20th May, the reality is that, having 6-month Business visas, we can come and go as we please – at least until August.

I now have the consolation of knowing that, once my leg is out of plaster, I will be able to return to Moscow, solo, and collect the motorcycle myself and ride it back to Ireland – a little adventure of my own to look forward to.

In the meantime, a few words of praise for EasyJet. I don’t have a problem with budget airlines. You get what you pay for and, by and large, the staff are pretty good humoured and efficient. Even so, my previous experiences with EasyJet have tended to be short flights to and from France, where it’s hard to avoid comparing the departure lounge to a crowded cattle market. EasyJet’s staff today have been exemplary. They have done everything possible to make my journey as comfortable as possible. From the Russian member of the Ground Crew who offered translation services at the Customs Desk, to Billy, and his Cabin Crew who offered me an empty row of seats, so that I could keep my leg elevated during the flight, they have been kindness personified. Thank you all.