No sooner had we collected our certificates and goodie bags from the ORS team, than we were on the road again. A quick detour back to the Abercrave Inn to pick up a case of our promotional T-shirts, and we were on our way north to Donington Park. Not, alas, for a track day. Though, perhaps, in retrospect, it was just as well. No, we were off to pick the brains of other, more experienced, adventure travelers at Horizons Unlimited’s HUBBUK event.

Donington Park’s campsite is conveniently situated directly below the flight path of the East Midlands Airport, less than two miles from the end of the runway, as the crow – or Airbus – flies. It also borders the racing circuit, making the provision of a quiet ‘no talking’ zone somewhat futile. But, having put the tent up in near darkness – our feeble wind-up torch augmented by occasional aircraft landing lights – it didn’t matter. We had been up since 6am and all we were interested in was a cold lager. Alas, it was not to be. Not tonight, at least. In one of the barns, we found a make-shift bar, stocked with a bewildering choice of real ale and cider. After a couple of pints of warm beer with quaintly accurate names like Thundering Bowels or Belching Betty, we were utterly done in. We slept through until sunrise. We didn’t even need the complimentary earplugs. 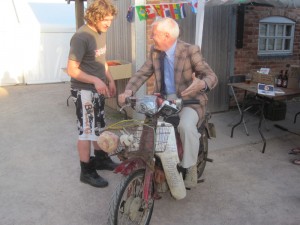 Long-distance motorcycle adventures don’t come much more bizarre than this. Here Ed March is showing Austin Vince his battered Honda C90 on which he made the trip from Malaysia to the UK.

It became quickly obvious, the following morning, that no matter how far you intend travelling, how original your motivation or how bizarre your chosen mode of transport, there will be someone at a HUBB event that will have your project trumped. Nothing is impossible to the point that, seeing a small ATV with a tent-like canopy for a roof, I momentarily wondered how far the driver had traveled in it – until I realised that it was, in fact, the hotel gardener’s buggy!

Not all of the journeys are successful and very few of the personal challenges involved make sense in any conventional understanding, but the resulting tales prove the old Taoist proverb, “The journey is its own reward.”

Wearing our ‘Inagh to China’ T-shirts for the first time, we wondered how our trip would measure up. At its most basic level, our route to China is a 9,500-mile road trip. Though, admittedly, around half of those roads will be unpaved or of variable quality, a lot of people have travelled the same route so we can be reasonably confident of getting there. More important to us is our responsibility to our nominated charities and, in particular, to William Winder’s family. There is something quite special to us about carrying William’s name all the way across the world and we are determined to do some good on his behalf. Naturally, we hope that our ride will raise a worthwhile sum for The William Winder Rainbow Foundation and Young Minds, but we are also well aware that far too many of these trips are for ‘charity’ in name only. It doesn’t take 5 minutes to set up a donation page with JustGiving or, in our case, iDonate (for William Winder) or VirginMoneyGiving (for Young Minds), but we really want our ride to accomplish more than that. We are determined to engage the young people who are the focus of the two charities: perhaps getting local school children to set up some challenges for us along the route, or perhaps getting them to prepare a short presentation to show other school children in the countries we pass through. We’re open to ideas. 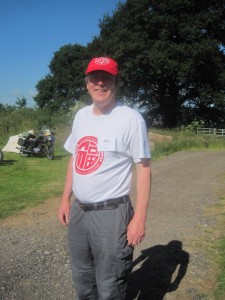 During the two days we spent at the HUBB event, we gleaned much in the way of practical information that will feed into our route planning. But of the many inspiring travelers we met and listened to, there was none more so than Ted Simon, author of Jupiter’s Travels. We had been due to leave at 4pm on Saturday, in order to get back to Wales for the ORS course on Sunday, but it was an easy decision to delay our departure to hear him speak. Ted Simon set the benchmark for motorcycle travel when he set out in 1973, on a four-year journey around the world on a 500cc Triumph Tiger.

Listening to Ted’s video presentation with footage and photographs from that trip, you couldn’t help but recognise how much the world has changed in forty years. And very little of it for the better. Again and again, he emphasised how important it is that travelers look around them and see the world as it is, rather than accepting the Fool’s Paradise of organised tourism. Ted Simon says of his own journey,

“The goal was comprehension, and the only way to comprehend the world was by making myself vulnerable to it so that it could change me. The challenge was to lay myself open to everybody and everything that came my way. The prize was to change and grow big enough to feel one with the whole world.”

“Ever since my original journey I have been learning more about its significance. The idea that I might be making it for others, as well as myself… It seems that when you raise yourself up to achieve something beyond what is needed just to live day by day, the energy you generate has an effect on those around you.”

That seems a good starting point for our trip.