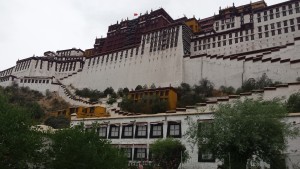 Tuesday, 23rd June: The morning was spent playing blog catch-up, as is usual on arrival in the nicer venues. The conditions at the “home-stays” aren’t really conducive the creative thinking, and I need all the help I can get.

Just after 1pm, we arrived at the square below the imposing Dalai Lama’s Palace and were given a run down on the history by our local Tibetan guide, Bobo. It’s fair to say that it’s a very sensitive subject in Tibet and it would be interesting to hear the Chinese version of the Buddhist history. That said, the Palace is a huge building with 999 rooms. There were supposed to be 1001, but the person bringing the plans back from the original designer lost a small sheet containing 2 rooms, hence the slightly smaller building.

Bearing in mind that Lhasa is 3,600 metres (11811 feet) above sea level, the thought of climbing to the top of the Palace didn’t exactly appeal. However, as I am most unlikely to ever pass this way again, I’m glad I made the effort. A few of us started to count the steps up, but quickly ran out of breath to bother. Suffice it to say that the view from the top was quite something, as was the inside of the Palace. There were many rooms that we were not allowed to see. Most of them, in fact. We probably didn’t miss much, as the ones we did see were quite similar and the ones we couldn’t contained property of the Dalai Lama himself, who had to leave in a hurry in 1959 … The rooms are therefore more or less how he left them, but it’s forbidden to show any of the rooms containing his property.

If this blog post doesn’t appear to do Llasa justice, it’s not that I am not interested in The Dalai Lama and his history. Unfortunately, Google doesn’t work in China and the Wiki page of the Dalai Lama doesn’t seem to load to double check the facts ….. Can’t think why!

Nothing much else got done on Tuesday as we recovered from the climb up and down from the Palace!