When we started the Mother Road Ride Rally in 2001, I remember the incredulous looks from the Americans on learning that I was planning to ride Route 66, 2448 miles from Chicago to LA, on a single cylinder 650cc bike! They were astounded when, despite sounding worryingly like a lawnmower at low speed, above 60mph the BMW F650GS simply purred along, easily keeping pace with the big boys and often, literally, leaving them standing. While their Harleys were prone to flat batteries, oil leaks and overheating, my little “dirt bike” never missed a beat. We shipped it home after the trip and it proved its worth as a commuter for several years in London before I traded it for an R1200GS in 2005. John was never a particular fan of German cars or bikes, and my 1200 was no exception. It therefore surprised me that my F650’s successors, the G650GS and G650GS Sertao, were pretty much top of John’s list for our Inagh to China excursion.

Mindful of the variable quality of the roads in Mongolia and the ‘Stans, we were looking for something with proven off-road capability, but more comfortable than an MX bike and lighter (and, let’s face it, cheaper) than BMW’s latest GSA behemoth. The 650 Sertao seemed to tick all the boxes, so what better than to take it on a bit of a test ride …

Neither of us have done any off-road riding since our Alaska trip in 2009 and, while John has been pootling back and forth to France on his Triumph Tiger, my 1150GS has been laid up with electrical issues and I haven’t so much sat on a bike in nearly six months. Not ideal preparation, but then we were only re-doing Level 1, so what could go wrong? 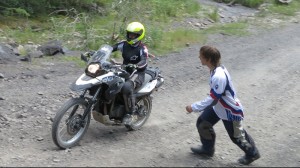 One can’t fail to be impressed with the standard of tuition at the ORS School. The instructors, all former competitors in one bike discipline or another at international level, seem blessed with limitless patience. In their hands, a quarter tonne 1200GSA becomes apparently weightless and what they can’t do with those bikes isn’t worth knowing. Just as well, as surely the most difficult part of their job is to convince the punters that they can do it too … with a little practice, of course. It’s an extraordinary transition to watch as every one of us, whether nervous, vertically challenged, slight of build or carrying a few excess pounds, gradually starts to believe we really can. By lunchtime on the first day, the talk is all sheer wonderment at the crazy exercises that we’ve surprised ourselves with, the very first of which is to pick up a dropped motorcycle. Sensibly so, as falling off is an occupational hazard on this course.

As it happens, John and I had both pretty much decided by the end of the morning that the Sertao wasn’t the bike for us. There was nothing wrong with it per se. If our trip was shorter, may be, and with a strong off-road bias, the Sertao would probably be perfect. But the truth is that more than half the mileage will be on tarmac and the 650 is just too under-powered and vibey to be comfortable. In any event, we were doing fine on the bikes until John misjudged a tight turn after a successful ‘hill recovery’ exercise on the second day. It was an innocuous enough topple, but the footpeg caught his right toe as the bike went down. He hopped about a bit, but there didn’t appear to be any serious damage, so he got back on the bike and we carried on to the ‘momentum’ exercise …

The momentum exercise involves riding up a small but steep mound, pausing on the top and then making a controlled descent the other side. It really couldn’t be much more straightforward, especially as we had been careering happily around dusty fire tracks, up and down much longer and steeper hills, through loose gravel and deep ruts, for a day and a half. Perhaps we were unconsciously afraid of running over our instructor, who was standing on the crest, ready to offer any necessary assistance. Whatever the issue, somehow this harmless little mound seemed to be playing mind games with us. The first two riders achieved the necessary clutch control without problems, the next stalled but made a safe descent. Then it was John’s turn … 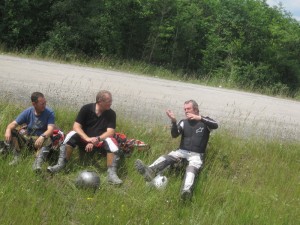 John, ignorant of the fractures to his fibula and waiting to try another bike, props his sore foot up as he explains how the accident happened.

He says he got his weight all wrong. He accelerated up the slope but, as he reached the apex he found himself sitting back on the pegs in such a way that he could no longer reach the clutch lever … or the brake. For fear of parting company with the bike entirely, John grasped the bars tighter, with the inevitable consequence that he opened the throttle rather than closing it. The result was spectacular! Instead of coming to a standstill at the crest of the slope, John literally took flight. Realising that, on its current trajectory, the bike was likely to land in the trees, taking him with it, he bailed out, swiftly moving his legs clear. On any other day, the bike would have slid away without incident. Alas, today, the bike’s knobbly tyres bit in the soft dirt, causing it to stop dead and bounce backwards onto John’s already injured right foot. Ouch!

Although in some obvious discomfort, John manfully continued the day and even tried out a few of the other bikes. His new Forma Adventure boots provided sufficient support to disguise the severity of the injury until he came to take them off back at the hotel.

… and here they are. Two small fractures of John’s right fibula.

John spent most of Tuesday with his right foot in a bucket of ice, trying to reduce the swelling, but on Wednesday morning it was as bad as ever, so we decided a visit to A&E (ER, if you are American) was in order. It turned out that John had two small fractures to his fibula and possible damage to his big toe, and is now looking forward to six weeks in plaster. “Quelle fromage”, as Del Boy Trotter would say.

It was a shame that John’s ORS course ended on such a sore note, as everyone (even John) had thoroughly enjoyed themselves. It is a great credit to the quality of teaching and the respect that the participants have for the instructors, that injuries like John’s are comparatively rare. Amazingly rare, in fact, when you consider that we are doing with these big bikes. Out of 40 or so participants, I believe John may have been the only one to require hospital treatment – and even then John hadn’t allowed the injury to spoil his day.

Since no photo exists of John’s spectacular flight, I felt obliged to supply an illustration