I had a number of things I wanted to do today: sort out my missing bolt (on the bike, not in my neck!), laundry, and to see Pavlov’s House. The import of the first two items pale into insignificance, having seen the third, and I really want to thank my son Dave, for suggesting I see it. 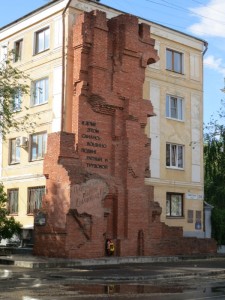 The inscription on the memorial reads: “In this building fused together heroic feats of warfare and of labor. We will defend / rebuild you, dear Stalingrad!”

I make no apologies for pointing out what may be obvious to some, but just for the benefit of those who were not aware, Volgograd used to be called Stalingrad, and World War 2 saw what is arguably the bloodiest battle in human history. Russian “total casualties” amounted to 1,129,619, whilst the German “total casualties” amounted to 850,000. A significant event during the battle was the seige at “Pavlov’s House”.

During the battle Sergeant Pavlov, in charge of his platoon, withstood a siege for two months before being relieved by Russian forces. The monument is the much photographed corner wall, which Dave sent me. When I went to see it I was not prepared to see the actual building preserved exactly as it was, and was seen in photographs taken at the time. The atmosphere near it is tangible, to the point that, while I was there, many coach loads arrived and went, but very few actually approached the building. Again, while I was near the building, I heard no one speak, they only stood, paid their respects, took their photographs and left, all in total silence. The memory of that building, and the atmosphere will stay with me forever. 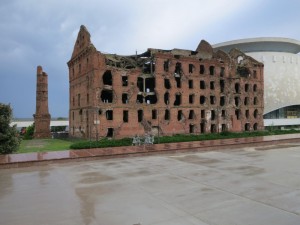 It helped me understand maybe some of the Russian psyche when it comes to politics. The Russians have long memories. They remember Napoleon – indeed, many Russian words have their origins in France, e.g. the Russian word for a shop is the French word magazin, just spelt differently – and they also have the visible reminder of Hitler.  No wonder then, that the present Russian leader worries about the West encroaching on what has been a traditional area of strategic interest, or “buffer zone”, between Russia and the West.

Politicians start the wars, they don’t fight them, if they did there would surely be far fewer of them.

I got a temporary replacement for my bolt but, as for my laundry, it won’t have to wait for two months for relief, and another day or two will make no difference.