Saturday, 22nd August: All credit to the staff of Mariinsk Central City Hospital; they took excellent care of us. Though, after ten days’ sampling Russian hospital food, John and I were more than glad to exchange the confines of our hospital room for a four-person ‘kupe’ sleeper compartment on the 62-hour train journey to Moscow. 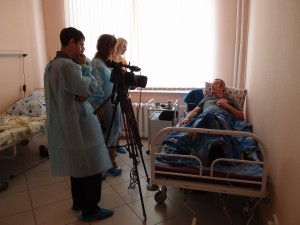 Our stay had been a surreal experience in many ways. The small town hospital was unlike any other I’ve experienced and worlds away from the weary and target-driven NHS. I dare say that most British patients would have been appalled by the lack of amenities. Our room was bare, furnished with two beds and bedside lockers, a table and a fridge. There was no medical equipment installed and no picture on the walls: no unnecessary dust traps, just a couple of reading lights and an electric wall socket. The colourful mismatched bedding looked like a job lot of leftover sale stock from Primark. But we were treated like minor celebrities and, in every way that mattered, the treatment of John’s injury was faultless. His dressing was changed personally by the (rather fierce) matron in charge, dressed from top to toe in sterile theatre scrubs and apron. Food was bland, but copious and, above 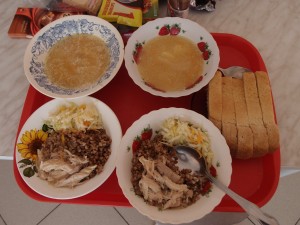 all, healthy. While we may or may not have relished the idea of various types of porridge (who knew there were so many?) and/or milk puddings twice a day, at least they were freshly prepared. Rice and cereal made up the bulk of our main meal at lunchtime too, but it came with a soup starter – and each meal was accompanied by the freshest of fresh bread, so sandwiches were always an option if yet another bowl of semolina or millet failed to entice.

All the staff had multi-functional roles, so it was not unusual for the nurse who had just set up John’s antibiotic drip, to reappear from the kitchen 5 minutes later with a large enamel kettle to offer us chai or ‘compote’ (hot fruit juice). Catering staff doubled as cleaners and the doctor in charge of the department helpfully ordered taxis whenever I needed one, and liaised with the British Embassy over my registration. None spoke English but, even so, did their best to cheer us up and engage us in conversation – in particular the doctor who, despite admitting via his phone’s Translate app, that he had forgotten all the English he learned at school, still managed “Good morning. How are you?” on his daily rounds. In fact, John and I have reason to believe he may have developed a bit of a crush, but probably the less said about that the better … In any event, my investment in a tablet pc, with the option of switching from UK to Russian keyboard and back, certainly paid off.

We also owe a huge debt of gratitude to Anna Antipina who, having had the misfortune to have happened to be visiting her husband at the time of our arrival at the hospital, was press-ganged into service as our translator for the duration of our stay. A service for which she was obliged to leave her three year old daughter in the care of her mother, and for which she received no compensation other than an official-looking laminated certificate from the hospital management.

As soon as we knew the date of John’s discharge, Anna took me to the station to book our tickets to Moscow. From my experience with Russian ticket offices, I knew this was something I would have no chance of doing on my own. It had been complicated enough, travelling on my own. Now I had to take account of John’s injury and make sure we weren’t assigned top bunks! (Note to self: top bunks on Russian trains are strictly for the young and agile; I am neither.)

Unfortunately, the first train leaving on Friday night had no remaining lower bunks. The whole rail system in Russia works on Moscow time and Anna explained that the next available train left at 2 o’clock – or 6 o’clock, local time. “6am, in the morning?” “Yes”, said Anna. We would have to fill the hours between John’s discharge and the train’s departure somehow but, once on the train, we would have nothing further to worry about until we reached Moscow. I agreed and the tickets were duly booked and printed. It was only when I got back to the hospital and took them out of my wallet that I noticed the departure time was shown as 14:29 … or 6.29pm local time. Worse, I noticed the arrival time in Moscow, 04:11! There was nothing to be done about the booking at this stage, so I explained the situation to the doctor and he agreed that John would be officially discharged on Friday, but we would be able to stay an extra night – thereby avoiding the need to book a hotel room. 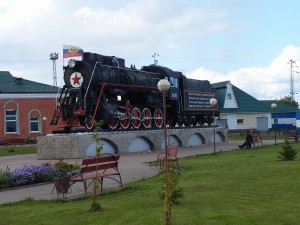 In the event, we escaped at lunchtime on Saturday and set up camp in the local café, who appeared genuinely pleased to see us again. While I ran a few errands in the high street, the staff made John comfortable at a corner table with Pullman-type seating so that he could elevate his leg. I bought more credit for my phone, cashed money, and bought picnic supplies for the 4,000km, 62-hour, journey. At 5.30pm, a taxi arrived to take us to the station.

We were less lucky with our compartment than I had been on the outward journey to Irkutsk. A young man and his father were already comfortably installed, occupying the top bunks when we boarded. They were friendly enough, but were probably less than thrilled to have to vacate the lower seating. The young man manoeuvred himself into the top bunk with the ease of an athlete on the parallel bars. But dad struggled, as I had done, to the point where we feared for the seat of his trousers as he balanced precariously between the bunks with one foot on each of the tiny ladders, before launching himself onto his bed. 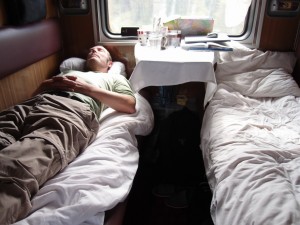 Before disembarking at Omsk, ‘dad’ persuaded us to try some of his friend’s homemade wine. At least, I think it was homemade wine; it was homemade, anyway. Ignoring our protestations, he pulled a lemonade bottle from his rucksack and poured out two large glasses of something that had the appearance and consistency of concentrated blackcurrant syrup, but carried rather more of a kick. We thanked him politely and remember very little of the morning after that … His son got off in Tyumen.

After the previous week’s Sunday Lunch of bulgar wheat and fish in hospital, we were looking forward to investigating the restaurant car. Getting there was an adventure in itself for John on crutches, negotiating the heavy double doors and moving footplate that separates the carriages, and then fighting our way through two or three crowded third class compartments. Perhaps that’s why no one else bothered. It was a depressing experience. Two stewards and the cook were seated at a dining table, looking at their phones, when we arrived. Faded curtains were drawn over the windows at one end of the carriage, casting a shadow over the deserted bar area; boxes of catering supplies littered the floor at the other end. We sat down and ordered one of the ‘Signature Dishes’ from an extensive menu. The best that could be said was that it was freshly cooked for us and a contrast to the hospital food. Otherwise, it was unexceptional and over-priced. 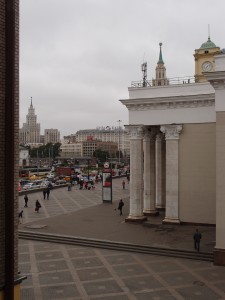 dark when we arrived in Moscow. Strangely, for Russia, none of the stewards was on duty, and it took a while before the passengers realised that they would have to fend for themselves. Confusion reigned. Eventually, the doors were opened, and with John unable to carry anything more than my small backpack, I hurled our luggage, piece by piece, onto the platform. As well as my overly-heavy sailcloth bag, we now had a huge and unweildy nylon zip bag containing our motorcycle clothes, boots and helmets. Once again, we were in the second to last carriage, at the far end of a very long platform so, when a ‘freelance’ porter with a trolley asked if we would like assistance, I accepted with alacrity. After a short distance, seeing John struggling, the porter loaded him onto the trolley along with the bags … There was, inevitably, a premium fee for this service, but we didn’t quibble. He dropped us at the door of the station’s own ‘motel’ – a few bedrooms designated “Long Term Waiting”. At 5,000 roubles for a few hours, it wasn’t cheap, but it gave us a unique view of early morning life in Komsomolskaya Square, and allowed us to rest and reorganise ourselves before disturbing Marina at the Night Train Motel. It also gave John time to have a haircut and shave …