A Scottoiler, when it’s working properly, is a great piece of kit; it reduces the need for chain maintenance, increases the useful life of the chain and sprockets and, ultimately, improves the performance of the motorcycle. Unfortunately, when the unit is not installed properly, the only thing that gets oiled is the inside of your wheel. Having worried about the oily muck that constantly accumulated on the rear wheel of my Triumph Tiger 1050, and with thousands of miles of variable climate and road quality impending, I decided eventually to contact Scottoiler themselves in search of a remedy. I sent them photographs of my installation and, on hearing of our imminent ride, allied to the problems I had had with my unit, they very generously sent me a brand new V-system, explaining what was wrong with the installation of the old one.

Now, I would have assumed that the long-established and respectable motorcycle main agent (no names, no pack drill) from whom I purchased the bike in 2008, could be trusted with a job as routine as the installation of a Scottoiler system. Alas, no.

In fact, from my observation of comments on various bike forums over the years, it appears that incorrect installation is not an uncommon problem. Hence, I thought I’d throw my tuppence into the ring with an illustration of my own experience.

How not to install a Scottoiler V-System

First here are a couple of photos of my previous Scottoiler installation. (Click on photos to enlarge.) 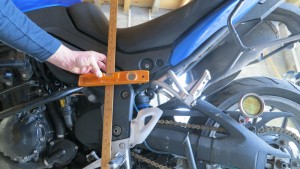 Original position of Scottoiler reservoir, showing its height relative to the dispenser assembly. (Photo taken mid-way through de-instalation, so dispenser tube is missing.)

Scottoiler’s installation instructions state: “For best performance, Lube Tube should be placed no higher than the RMV (Reservoir Metering Valve). If placed too high, the reservoir may continue to flow even when the bike isn’t running. It can be placed at the same height as the RMV but no lower than 10 cm below the reservoir. If placed too low, it will not refill the RMV.”

You will see that the reservoir is at least 6 inches below the lube tube, not great! 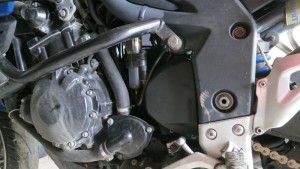 In this next photo, you will notice that the reservoir is behind the engine bars. To be honest, that’s an own goal as I installed them after the Scottoiler, but it does illustrate the point that you need to try and think ahead about how easy it will be to refill the reservoir. In this case, it wasn’t …… 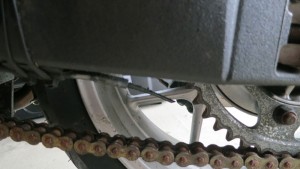 This photo shows where NOT to have the dispenser assembly. It doesn’t take much working out that when the bike is being ridden, the oil will be blown about by the wind and that the only place that it won’t go will be on the chain. So, if you are getting a lot of oil on the rim of your wheels, or on your tyres, check where the tube at the end of the assembly is pointing.

Correct installation of the Scottoiler V-System 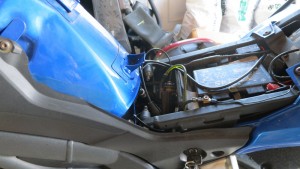 Now I have removed the old Scottoiler system, here is where I placed the reservoir and the dispensing assembly. The reservoir is underneath the seat, immediately behind the tank. This ensures two things: firstly, that it is at roughly the same height as the lube tube and, secondly, there is enough space to get to it to fill it. 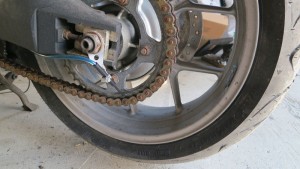 And the dispensing assembly is mounted on the rear wheel spindle on the large dispenser plate provided. By gently bending the plate towards the wheel, it can be left just about touching the rear sprocket anywhere between 5 o’clock and 7 o’clock, so that the oil will run down the sprocket onto the chain and then be dispersed onto the chain, NOT onto the wheel!

If in any doubt, there is a wealth of information on the Scottoiler site at www.scottoiler.com including bike specific installation advice. In addition, the guys are only too willing to help in the event of any questions.