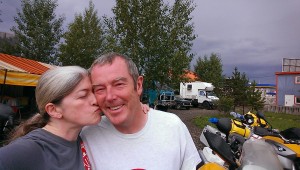 Saturday, 18th July: Here are two posts – one from each of us – describing the lead up to our reunion in Ulaanbaatar.

Wednesday night, I hardly slept a wink, I think I just managed to nod off 5 minutes before the alarm sounded. It was the excitement. I had breakfast and packed, and was ready a full one and a half hours before the taxi came to take me to the airport. The ride was uneventful and the wait for the flight seemed interminably long. Indeed, although we got on board on time, the plane took off an hour late and landed half an hour late. After taxi ride to the hotel, I rang Navo Tours to get in contact with one of their guides who was to take me to collect my bike. In the event, the bike was literally a couple of hundred yards around the corner, crated up in a wooden cage made from pallets. It looked rather fragile, but looks were deceptive and it took a fair bit of dismantling with a crow bar to free up the bike. The wing mirrors had been removed and the only issue was that I will need two spanners to adjust them properly! I rode it back around to the hotel and went out for dinner with the guide, Green, and two Australian couples: Alan, Lynn, Barry and Donna, who were in the middle of a fantastic adventure of their own, travelling in convoy in their own two 4 x 4s in a very convoluted route from Australia to Portugal. 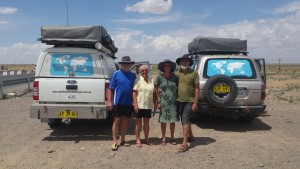 The following morning, we met up to cross the border together with the help of Green and a Navo Tours man who specialised in the customs issues at the border. As usual, it took time but eventually we were out of China. Getting through the Mongolian customs was a bit of a trial as the guides were then not with us, but I managed to get through eventually with just a stamp in my passport, nothing to show for the bike at all, although I’m sure the details were entered on a computer at one of the many windows I visited.

Then it was “North to Alaska” …. Well, actually, Zamyn Uud was the first town, from where the idea was to find the apparently tarmac road north toward Ulaanbaatar. The Aussies were delayed a bit coming out of the border when one of them drove over a metal bracket which was part of a fixed “stinger” – a device designed to puncture the tyres of vehicles who upset the border guards. I rode around looking for the road, whilst examining Garmin, but it didn’t seem quite right. The route seemed to be taking me straight North but the road was very poor and petered out into sand. I turned around and pulled off the road and, as usual a crowd gathered. I asked, hesitantly, for Ulaanbaatar and one older guy indicated that I was indeed on the right road. I set off again, having a little earlier passed the two Australian vehicles who were letting air out of their tyres in anticipation of a sandy road.

I came to the end of the tarmac and was horrified to find that the road was sand – soft, but packed down and not too bad. I rode along slowly, skidding a little from side to side. I am fairly sure I should have been riding a bit faster and should have let my tyres down as well. However, I carried on and before long I found a patch of soft sand and down I went, for the third time on the trip and again on the right hand side. As I went down I just managed to prevent my leg from getting trapped under the pannier and after a quick check, decided that there was nothing wrong with it.

Phew! I got up and had just started taking off the uppermost pannier when a local biker on a small 125 machine pulled up and walked up to the bike and started to lift it. I quickly ran to the handle bar and hauled it up with him. I must say there didn’t seem to be much of him, but he certainly did more of the lifting than I did. At his prompting I jumped on, he handed me my helmet and off I went again, just as the Aussies pulled up next to me. A bit of banter and off we went in convoy, with me dreading a ride on soft sand all of the way to Ulaanbaatar. Fortunately, a couple of hundred yards down the road the road we joined another road. A tarmac road. Heading north. And it was nice new tarmac. Google Earth was right! I joined the Aussies on the tarmac, and left them as they pulled off the road to pump up their tyres! Next stop Sainshand and an overnight stop in a poor hotel with no hot water, but the bed was comfortable and I slept reasonably well.

Then D-Day, or maybe it should be B-day, but that wouldn’t sound right either would it! A very quick breakfast and I was on the road. It was just under 500 kms to Ulanbaatar and wanted to get there as soon as I could. It was a cool day and threatening heavy rain, nevertheless I stopped and took photos on the way.

Garmin, yet again wanted to take me on a convoluted route around Ulaanbaatar, but I was having none of it. I headed for the waypoint for the Oasis Guesthouse like an arrow flying to its target. It turned out that it was just off the main road and there was a small service road straight to it, Bloody Garmin, PAH! I rode into the courtyard to be greeted by a sea of bikes, and there in the middle was Brigid’s bike, the “Yellow Peril”. Bliss!

I knew that John had stayed near the Chinese border on Thursday night and was due to cross into Mongolia early on Friday. In all probability, he would arrive in Ulaanbataar on Friday afternoon, a full day before me. 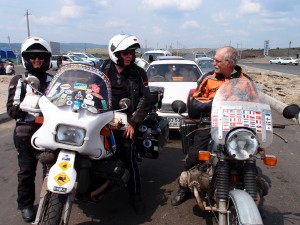 Our border transit took 3 hours, during which the promised rain arrived. Somehow, despite the Mongolian side having a large covered hangar in which to carry out vehicle inspections, the officials contrived to position all three of our bikes directly under the overflowing gutter. Still clutching my bike title and customs declaration, I unwisely ran out into the rain to gather up my Klim jacket and body armour, which I had draped over the bike seat. I was instantly soaked from head to foot … which explains the soggy documents I came to hand over to the border officials minutes later. It was gone 5pm by the time we had cleared customs, changed currency, and bought our third party insurance, so we took the decision to stop overnight in Darkhan.

Darkhan is a dreary town, whose only notable feature is its proximity to the border. It boasts half a dozen dull hotels, variously described as “average”, “tired” or “functional”, and none of which anyone would use if they didn’t have to. We checked into the Karaa Hotel, which one reviewer suggested was better and cheaper than the Comfort Hotel just around the corner. Perhaps it was, but that didn’t say much for the Comfort Hotel and, unfortunately, we had arrived on the last night of a National Festival which meant that the restaurant was closed.

The Comfort Hotel had a cosy-looking restaurant in a traditional ger in the car park. Inside, it was traditionally-decorated with carvings and wall hangings, and rather gruesome animal skins, which imparted a distinct, and slightly unpleasant, odour. ‘Essence of Wet Bear’, anyone?! Beer was off, apparently due to the National Festival, but so was tea with milk. The waiter spoke no English, which didn’t help, but I managed to get a green tea and Sam had milky coffee, which confused us somewhat. Why could they provide hot milk for coffee, but not cold milk for tea? Eventually, it transpired that it was actually the black tea that was off, so Ken and Carol were left without drinks until they persuaded the waiter to get them a coffee instead. We ate our food as quickly as possible and retired to Sam’s hotel room to raid the mini bar. We couldn’t wait to leave in the morning. 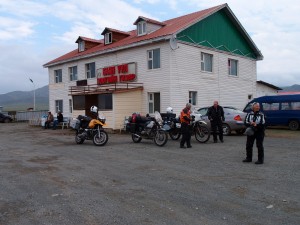 The Mongolian language turns out to be nothing at all like Russian, despite using the same Cyrillic alphabet. We needed breakfast, but had no idea how to identify a roadside restaurant. In the end, we pulled over at a house with an open door and a few cars outside. Good call. Better still, the menu was in pictorial format, with a huge poster hung on the end wall, advertising the various dishes available. All we had to do was point at whatever took our fancy and pay …. Well, that was the general idea. Unfortunately, the first couple of choices were not available. “They’re not ready yet”, came a female voice with an unmistakably Australian accent. The speaker introduced herself. She was a Mongolian, home for the holidays from … Brisbane! Living streets away from Ken and Carol’s former stamping ground. What a small world.

The rest of the ride into Ulaanbaatar was uneventful, until we reached the city centre. I was due to peel off from the group to find the Oasis Guesthouse, but construction had closed part of Peace Avenue. Instead, I followed Ken and Sam, who had booked an apartment. It was hot and the traffic was almost stationary, so it was no surprise when Sam and I got separated from Ken and Carol at an intersection. Assuming they would have stopped to wait, we looked out for them when the traffic moved on, but they were nowhere to be seen. I was now well beyond the roadworks and, strictly speaking, could have turned back on to the main drag. But Sam was on his own. I caught him up and suggested he follow me to the Oasis. He agreed, little knowing that I barely know how to operate my GPS, much less lead someone safely through the Ulaanbaatar traffic to an unknown destination. When I saw the Oasis Guesthouse sign come into view, I did a small virtual air punch in triumph. Sam was none the wiser.

John had not yet arrived. I checked in as quickly as I could and got the wifi password, so that I could log in and retrieve Carol’s phone number. She managed to pass on the first part of the apartment’s map coordinates before the phone cut out, leaving Sam waiting for her call back with the vital second part. In the meantime, I started to unload the bike.

Suddenly, from the first floor bedroom, I heard the familiar sound of a Triumph engine. I ran to the window just in time to see John arrive on his blue Tiger 1050. He had spent the night at Sainshand and we had, after nine weeks apart, crossed a whole continent and managed to arrive within minutes of each other in Mongolia. Crazy, eh?!