Monday, 6th July: Having made the decision to ship the bike by train to Irkutsk, I needed to get a crate made – and, for that, I needed to take the bike back to Andre’s warehouse. A frequent criticism from John is that I never have to find my own way anywhere, as I’m always following him. It isn’t quite true, but he has a point. I’ve never liked or trusted GPS and haven’t, up until now, had to use my new unit. But how hard could it be?

Not at all hard, as it happened. In fact, I arrived early, on the basis that I needed to visit a bank. I asked Andre if there was one nearby. Andre speaks no English, but he understood my lousy Russian well enough. Unfortunately, here’s where I have a problem with these audio learn-any-language-in-a-matter-of-hours-type courses, they never, ever, give you anything like enough practice with comprehension. So, although there might, very possibly, have been a bank within walking distance of Andre’s warehouse, I would never have understood Andre’s directions to find it. Lack of communication is a dispiriting experience and, in the case of Russian, one that I hope to remedy. 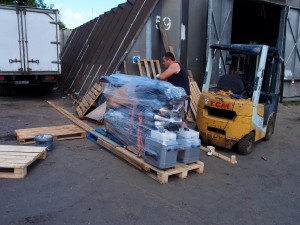 Andre sighed and pointed to a couple of wooden pallets that had been fixed together to make a bike-sized platform. A hole had been cut in the top to hold the front wheel. Andre motioned for me to ride the bike onto it. Apart from removing the panniers, that was the end of my input. Within minutes, his team had strapped the bike down and removed the windscreen and mirrors. The panniers and tent were wedged in place beside the bike, and a couple of unsuccessful attempts were made to syphon the remaining fuel from the tank. Then the entire bike was wrapped in several layers of cling film, giving the appearance that it had been trapped in a cocoon by some monstrous alien being. The crate itself was then built around the bike using lengths of timber around the sides and two more joined pallets for the top. Then more cling film. 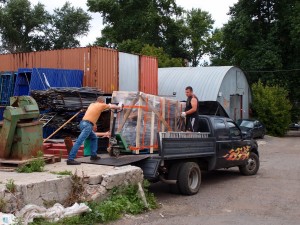 With immaculate timing, Maxim arrived with his truck just as the crate was being finished. It was loaded on board and we took it straight to the freight depot … via a bank!

I changed the last of our Euros, giving me 20,300 Roubles which, on the basis that the bike freight, passenger ticket and motel would all be paid for by credit card, and allowing for the money I owed Andre for the crate, should have given me plenty of cash to see me to Ulaanbaatar. Should have.

We arranged for the bike to leave on Thursday, with a scheduled arrival in Irkutsk on Monday 13th. The plan was that I should leave on Tuesday and take a couple of days break somewhere along the way.

The bike was unloaded from the truck and weighed and then ‘inspected’ for any signs of fuel in the tank. If there had been any doubt as to the integrity of Andre’s crate, now would have been the acid test. One railway worker jumped on top of the crate and put his ear to the cover, while two or three others rocked the crate back and forth in the expectation of being able to hear any fuel slopping about. Nothing. So a hole was punched in the outer wrapping so that they could tap on the fuel tank. Zilch. There had, in fact, been too little fuel left in the bike to syphon – a tiny quantity that I illustrated to Maxim between my thumb and index finger. “Don’t show me your fingers,” he said quietly, “I don’t want to be here all afternoon!”

Forms were filled and a (discounted) price was agreed: 20,200 Roubles. I reached for my credit card. Nope. They don’t take credit cards … So I handed over the cash and was back to square one. The whole transaction was friendly and helpful and was wound up by the clerk writing the address and telephone number of the receiving depot in Irkutsk on a Post-It note, which she handed to me with a business card. This brings me onto another issue I have with audio-only language courses. How the Hell are you supposed to find your way about or order from a menu, if you can’t read the language?

In fact, I don’t have a problem with printed text or signage, as I taught myself to pronounce the Cyrillic alphabet back in 2011, on our first trip to Moscow – and many words, even if you can’t speak Russian, are so close in their pronunciation that you can often hazard a guess at their meaning. However, the railway clerk’s hand-written note posed a new problem. Russian print and Russian handwriting bear very little resemblance to one another!

With my onward travel plans quickly beginning to crystalise, I needed to buy myself a passenger ticket and do a bit of shopping. Maxim dropped me off at Yaroslavskaya station and left me to my own devices.

I cashed some money at the ATM by the entrance and bought a mobile SIM from the Megafon kiosk in the main hall. Then I joined the queue for tickets.

Russians don’t do queues; not as we British know them anyway. There were only two people in front of me when I arrived, but as the ticket-issuing process dragged on, more people crowded in to see what was causing the delay. Short of whacking the lot of them on the back of the legs with my stick, there was very little I could do about it. Eventually, three or four people were served ahead of me and then, just as I arrived at the window, the cashier signalled that he was off for his tea break. I cursed under my breath and moved to the next window, where the routine began again.

Every ticket took about 15 minutes to issue so, unsurprisingly, everyone in the queue was impatient. At last, the old man in front of me reached the cashier. He explained what he wanted and presented his passport and money. The cashier reached for it, only to be interrupted by a young woman who had pushed in from the left. She bellowed at the cashier, and shoved her money and documentation under the screen. The old man complained feebly and grabbed his money and passport back. The cashier was unmoved by the girl’s lack of manners and dealt with her ticket with the same lack of urgency with which she dealt with everyone else’s.

The old man was next and then, at last, it was my turn. I took a deep breath and prepared to explain myself. A young man who had been bobbing about impatiently to my right looked as if he were about to wet himself. Though my left leg was now beginning to ache from standing, he clearly considered that his time was more valuable than mine. I asked, in my best Russian, whether he thought was likely to be quicker than me – which, of course, he did. So I said “Pashalsta” and waved him through. Some gangly-looking Herbert at the back of the queue decided he might also try his luck, but he got a swift, and rather fierce, “Niet!”

However, it seems, although I didn’t intend it that way, that one good turn really does deserve another. So, having failed to impress the cashier with Google Translate on my phone, an English-speaking student came to my rescue. In surprisingly short order, I was leaving the station with a one-way ticket to Omsk, a destination picked at random for no better reason than it was approximately half-way to Irkutsk. 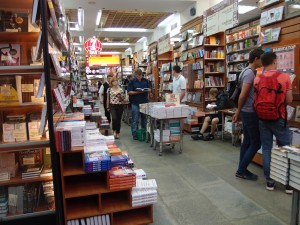 The complete train journey to Irkutsk was going to take four days, even without the two nights in Omsk, and I was going to need something to occupy me. Here was a God-given opportunity to learn Russian handwriting. So I caught the Metro to Lubyanka station, where I found Biblio-Globus, one of Moscow’s biggest bookstores, and bought myself a child’s handwriting primer and Petrov’s Basic Training Course; Russian in 16 Lessons.

Back at the motel, I repacked my bags ready for the following morning and, having had a bit of a snooze, ventured out for dinner at the Honky Tonk bar. I hadn’t intended to stay out late, as I hadn’t been sleeping very well, but I was joined first by Dmitry Khitrov, then by a Spanish rider, Ricardo, and lastly by Maxim, who all took great delight in teasing me for my choice of Omsk as a staging post. Ricardo regaled us with stories from previous rides and amused Dmitry and Maxim with his rendition of a Georgian folk song which, though his seeming fluency in Russian impressed me, was apparently delivered with a thick Spanish accent! Fuelled by nothing more potent than tea and hot fruit cordials, we chatted and laughed until well after midnight.