Friday, 3rd July: Ok. It’s about time I started my own version of events. I arrived back in Moscow on Thursday, with the intention of leaving on my own Trans-Siberian adventure on Saturday.

A taxi arrived on Friday morning to reunite me with my bike, which has been stored in a warehouse on the East side of town. I arrived to find that Andre had already rolled it outside and it was waiting there, with the keys in the ignition, ready for me to ride away. Or not, as it turned out. 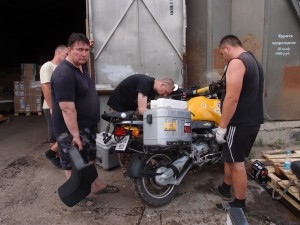 Somehow, over the 9 weeks or so that it has been in Moscow, the battery had run completely flat. There wasn’t even enough charge left to illuminate the instruments. Nothing. Nada. We lifted the tank and tried to jump start the bike, but the Odyssey battery didn’t want to know. Mercifully, at this point, the cavalry arrived in the form of Maxim, who made a quick phone call and, 10 minutes later, Denis arrived.

After unsuccessfully trying to jump start the bike himself, Denis declared the battery unsalvageable and said that there really was nothing else for it but to buy a new one. Seeing that everything was now in hand, Maxim left to attend to a licensing issue at the Police station, while Denis and I went to find a suitable battery. 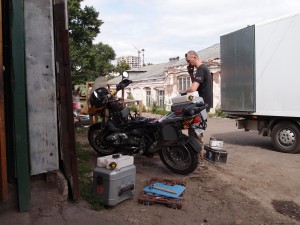 The new battery was a traditional wet cell type, requiring the addition of electrolyte to start the chemical reaction. Denis didn’t have any … but he knew a man who did. So we waited outside on the street for another knight in shining armour to arrive – this time on an earsplittingly-loud Harley Davidson chopper. A suspicious brown-looking liquid was produced from a pannier. Denis sniffed it. After a brief discussion, this new hero was sent on his way to buy a new bottle, while Denis and I made small talk in a halting combination of English and Russian, aided by my (woefully inadequate) beginners’ dictionary.

Denis bought some sausage rolls and water for lunch, and the day wore on as we waited, first for the electrolyte, and then for the battery to cool and the volatile gases to dissipate.

At last, the battery was fitted and the bike started. This was my moment of truth. Despite confidently assuring everyone that I was perfectly fine to ride the bike, I was all too aware that I was taking a bit of a gamble as I manoeuvred out of the warehouse and onto the Moscow streets.

It was now about 5pm and I still had to get the new set of Heidenau tyres fitted. On any other day of the week, I would not have bothered. There was a fair amount of tread left in the Tourances and our original intention was that John and I would change our tyres in Astrakhan. However, what with one thing and another, I simply didn’t want to be carrying the new tyres with me across Siberia and, given the sort of roads that John encountered on his ride south to Kazakhstan, the Heidenaus seemed a better choice for Siberia than part-worn street tyres.

By the time I got back to the motel, it was 7pm. I was hot and exhausted, and it was more or less a foregone conclusion that I wouldn’t be going anywhere on Saturday. I texted Maxim to let him know where I was and to say that I was now open to the idea of shipping the “Yellow Submarine” by train. It transpired that Maxim had spent an equally frustrating day at the cop shop and his reply – not aimed at me – contained some impressive usage of English vernacular! We agreed to meet up later at the Night Train to make a plan.