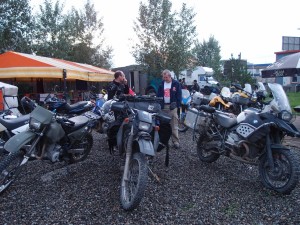 Tuesday, 21st July: The Oasis Guesthouse in Ulaanbaatar is a hub for overland travellers of all nationalities and, despite its position, off a dirt side road on the eastern edge of town, is a landmark in its own right. It’s a hostel, rather than a hotel, and most guests use shared dormitory accommodation either in the main house or in one of half a dozen traditional gers in the courtyard. In contrast, John and I had what appeared to be the owner’s apartment to ourselves. The apartment sleeps up to four people. Single beds, though.

The café operates on an honesty system. Rock up any time of day, order food from the kitchen, help yourself to a slice of cheesecake, a beer or a fruit juice from the fridge, and just write it down on your ‘kitchen passport’. You pay at the end of your stay. Cash only. 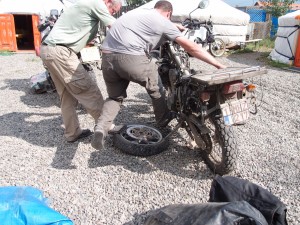 But the thing that makes the Oasis so popular with overland travellers, is …. well, other travellers. Motorcycles, bicycles, backpackers, and 4×4 RVs come and go all the time. Organised tours or solo. Need information on the road conditions where you’re headed? You can be sure, even if there is no one in the hostel who has come in from there recently, someone will have been talking to someone else who has – and it’s far more reliable and current than any Google or HUBB search. Need help changing a tyre? Someone will have a bead breaker handy. Just ask.

John and I spent Sunday relaxing. We took advantage of the (slow) Internet access, did our washing, caught up with our blogs and compared our journeys. It was just nice to ramble about our various experiences and our expectations for the trip home, with nowhere else we had to be and no risk of interruption. In the evening, we took ourselves out for a slap-up meal in the centre of town. 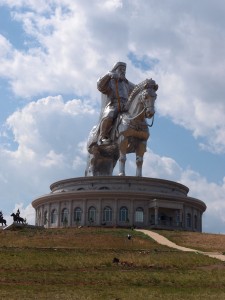 By Tuesday, we had pretty much exhausted all that Ulaanbaatar had to offer, so were pleased when Ken Duval suggested stopping by to pick the brains of some Dutch travellers who had recently arrived from the Altai Mountains. His bike had been suffering an intermittent electrical fault and he needed to check on the condition of the roads before making a decision about onward travel. Also, we all wanted to visit the Genghis Khan memorial, about 50km to the east of town. The road was reported as dangerously poor, so it would be good to travel as a group.

To drive in Mongolia is to take your life in your hands. From the moment GlobeBusters’ Director, Julia Sanders, had suggested meeting John in Ulaanbaatar for the ride home, it had been pretty clear that I was not up to riding our original route across Mongolia on unsurfaced ‘washboard’ roads. I was very much here on the understanding that I would be sticking to the tarmac. Even so, there’s tarmac and … other surfaces. If there’s one thing Russia and Mongolia share, it’s the unpredictable nature of paved roads. And then, of course, there’s Mongolian drivers to factor into the equation … 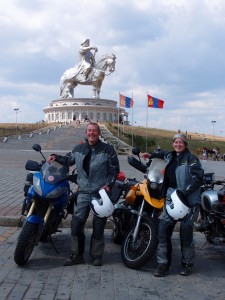 Although Google Earth appeared to show a new road out to the monument itself, I hadn’t reckoned on the ‘Demolition Derby’ that was the 25km stretch of potholed Hell out of town. All manner of vehicles hurtled towards us on the wrong side of a narrow ribbon of broken concrete, swerving violently to avoid the worst of the holes, cars tail-gated and overtook on both sides, constantly honking their horns, and buses trundled along, stopping two or three abreast, seemingly with no consideration or even consciousness of any other road user. With this as a benchmark, the unmade roads that form the majority of the Country’s transport network, might seem positively benign!

In any event, Ken and Carol, Sam, John and I, all made it to and from the monument with no mishaps and were glad we had made the effort. The Genghis Khan Memorial (or ‘Chingiss Khan’, as he is more usually called here) is extraordinary and quite spectacular. Mongolia’s answer to the Statue of Liberty, perhaps?

John and I were due to ride out to Kharkhorin on Wednesday morning so, having gone back to the Oasis for a much needed shower and change of clothes, we met up with Ken, Carol and Sam for a farewell meal at the excellent ‘Mexi-Khan’ (I kid you not) Restaurant.