I was up early, intending to take a video of some of the city and some photographs from the city walls. I had asked for some washing to be done the day before, but didn’t realise that it was to be done by the manager’s sister … who was one of the girls leaving school that day. In her excitement about her graduation, she forgot about the laundry. Cue much embarrassment from said manager. Ah well, having reassured him that it wasn’t a problem, I left, content at least in the knowledge that I still had some clean underwear left! It was now late morning.

The road to Bukhara is much the same as the other roads in Uzbekistan, in a poor condition but with much evidence of serious road building in progress. My journey was further delayed by being drawn out of the police check-point lucky dip three times and by a train crossing a dual purpose bridge. Both sides of the bridge were manned by more policeman and at every point they stressed “No Photo, No Photo”.  So, despite my using Brigid’s trick of using my left pocket to keep the camera and practising using my left hand to take the shot, at no point was I out of view of the police to successfully take a photo. B****r! 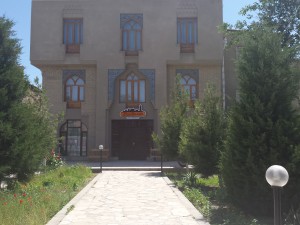 My progress was also hampered by my not so trusty Garmin. On bumpy roads it now can’t decide whether it will stay on or not and, in accordance with Murphy’s Law, it doesn’t work when I am nearing a junction requiring a decision … and where there are no signposts. Nevertheless, I eventually arrived at my chosen B&B, hopeful of an empty room.

Before I could even get off the bike I was accosted by two Germans and another man, curious as to where I had come from. Someone else then asked me if I needed a room. A bit warily I agreed that I did and asked where. He pointed to a smart looking small hotel right in front of me. A quick look inside and a phone call to an English speaking man to agree the price sorted me nicely, thanks. Within 5 minutes I walked back the 20 yards or so to the bike to find it surrounded by 5 policemen. I was pleased to be reassured that they too were only curious about my trip and where I had come from. An extended chat with them satisfied their curiousity and I was getting anxious for my shower when two more guys wandered up to me. Boy was I popular today! 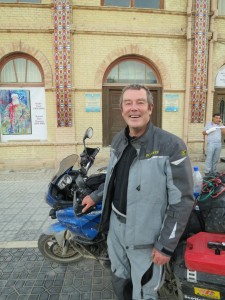 The two men were French, both Thierry, one from Bergerac, near Bordeaux, and the other from Annecy in the Alps. Curiously, they had also left Khiva that day and were doing almost exactly the original route, out and back via Mongolia, that Brigid and I had planned until we decided to go into China with Globebusters. A couple of photos later I almost ran to the hotel!

Showered and changed, I set out to find a place to eat and who should I bump into but the two Thierrys, so we went and ate together and had a very pleasant evening curtailed only by their exhaustion. In need of a beer, I wandered down to the open air bar and sat quietly contented with my progress so far. I was then drawn into conversation by a young man sat with his family at the adjoining table. I think he wanted to practise his English, which was very good. He had applied to go to study in Japan and awaits news of a potential scholarship on Monday. His older brother then joined in. He was only in his first year of learning English and I was his first real English speaker. He was obviously lacking in confidence, but it quickly became apparent that his English was very good for one so new to the language. It was then that his younger brother corrected my comment that if they can learn two languages they could learn a third fairly easily. It appears that they already speak three languages: Uzbek, Russian and Persian.