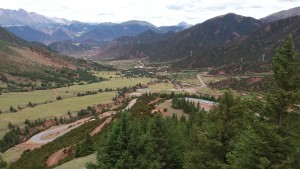 Sunday, 28th June: It was a long, hard day’s ride today, to Zougong, with lots of stretches of road under repair. That means lots of dust, detours over rocky roads and avoiding the countless convoys of Chinese Army trucks. I really don’t think there is any significance to the number of convoys, they just like to keep the young “squaddies” busy and it seems nearly every town in Tibet has an army base. I think they use the Army to build the roads in addition to the guys operating the bulldozers and diggers. Hey ho!

After yesterday’s excursion into the mud, Chris Biggs and Throttle John took pity on me and I rode with them. They showed great patience as I took my time over the sections of road with the worst of the surfaces. I am currently still nursing my pannier carriers and my metal sump guard. The latter is being held on by only one of the four brackets and two lengths of zip ties. It has worked for me since Uzbekistan but I need to find something a little more resilient … anyone got a metal coat hanger I could have?!

Speaking of mud, despite standing under the shower in my riding gear yesterday, I am still walking around with clouds of dust coming off my jacket, trousers, gloves and my Camel Pack which is a refillable water carrier. The bike seems to have suffered very little from the experience, although there are a few scratches that weren’t there yesterday morning. It is running very well and I am delighted with it. That said I will need to give it a good once over when we get a fully day’s rest in Chengdu. 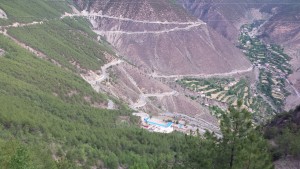 The ride itself was along some wonderful mountain roads with real “twisties”, we just have to ride very carefully as, not only did we have to cope with the army convoys, but some rank dangerous driving by idiots in the seemingly endless convoys of white 4 wheel drive cars. Overtaking cyclists or other cars whilst approach blind bends seems almost obligatory to them. Consequently, the horn on my bike has been getting a lot of use and seems to have developed a sore throat! I might have to visit a “Tuk tuk” shop to get a new one! The Tuk Tuk is a curious vehicle which is best described as a cross between a small van and a lawn mower engine. They are slow but reliable and seem to be used for just about everything and the best bit about them is their loud horns.

The one bummer today was that my bullet cam seemed to have packed up and no matter what I couldn’t get it to work. During the day I didn’t have time to pull it to bits to try and sort it out. However, when I eventually did it turned out that the switch to chose either the quality of the video went from 1080p to 720p. Now I always leave it on 1080p as it is a higher quality, and the damned thing was working when I left the hotel in the morning and only stopped after that. However, when I put the switch back to 1080p the video started working again. Trust technology to let you down.