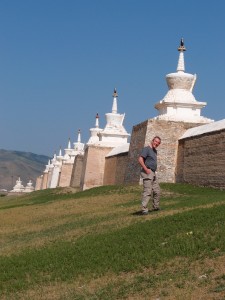 Saturday, 25th July: When I broke my leg in May, it is likely that, if push came to shove, we could both have claimed for curtailment of the trip then and there, on the basis that, with my leg in plaster, I couldn’t look after myself at home. However, riding to China was a once-in-a-lifetime experience that I didn’t want John to miss out on, so we came up with another plan. John would join GlobeBusters and ride to Beijing but then, rather than riding home across Mongolia, as we had intended, he would fly back with the rest of the group. Of course, at the time, we hadn’t realised how difficult it might be to change his exit permit to allow him to leave from Beijing, but that’s another story …

As far as John was concerned, this was a ‘least worst’ solution. Those of you who know him well, will know his love of military history and, although my Shanghai-based cousin had originally suggested the ride, the goal of getting to China had quickly been usurped by a greater desire to see Mongolia – the empire of Genghis Khan. While John would be seeing remote parts of Western China and Tibet that few tourists ever have access to, in flying home from Beijing, he would be missing out on Mongolia and, in particular, Kharkhorin … Genghis Khan’s ancient capital city. His disappointment was tangible.

So, naturally, when we came up with the plan for me to join John in Ulaanbaatar for the journey home, one of the first things I did was to research the condition of the road as far as Kharkhorin.  As far as I was concerned, if there was any possibility of getting John there without putting too much stress on my recently healed leg, then that’s what we must do … what I must do! So I had a look at Google Earth.

It was good news. The road from Ulaanbaatar was definitely ‘surfaced’. We paid our bill at Oasis and packed the bikes. However, as often happens when travelling by motorcycle, just as we were leaving, another group of travellers engaged John in conversation. They had just come from Kharkhorin in a truck and warned of extremely difficult conditions for the last 50km or so, due to road construction and detours. I had no desire to have to detour off the main road, but to get this far and not to even attempt the trip seemed feeble. We agreed to give it our best shot and be prepared to turn around if necessary.

Ulaanbaatar must be one of the longest cities, east to west, anywhere. We seemed to drive for miles and miles before we were eventually clear of manic car drivers and railway tracks. But, eventually, we were out on the open road, with only sporadic settlements of gers and herds of goats, horses, yaks and cattle to look at. There was nothing difficult about the ride, except that we had set off later in the day than we had intended and the midday heat was intense. We stopped once or twice for water and/or fuel.

We had travelled well over 100 kms when we found the road ahead blocked by a nightmarish accident. Without going into too much detail, it involved two cars and an overturned truck transporting sheep. I didn’t look too closely at the wreckage …. No, the problem as far as I was concerned was that traffic was being forced off the highway from both directions, down a steep verge onto a single sand track though the grassland that bordered the road for as far as the eye could see.

Having made myself the promise not to ride ‘off-road’, I had not, in fact, so much as stood on the pegs, since my accident in May – and I didn’t fancy the idea of competing for space with the oncoming traffic on the track.

John was worried for me. He suggested turning back, but that really wasn’t a realistic option. I’ve ridden in more difficult conditions on Simon Pavey’s BMW Off Road Skills Course in Wales. I told myself I really should be able to do this!

John went ahead and picked out a fresh route through some low shrubs, away from the traffic. All I had to do was to negotiate the 8ft drop from the main road and then make a quick turn before the traffic behind me caught up. I lined myself up, took a deep breath, stood up, and let the bike (with its new Heidenau tyres) do its stuff.

At the other end of the diversion, there was a double dip before we briefly re-joined the traffic on the track and negotiated the 8ft climb back onto the main road. Suddenly, everything fell into place and I realised I was riding normally again. I punched the air as the bike bobbed easily over the curb and back onto the tarmac.

The ride as far as the Kharkhorin junction was uneventful, and we began to wonder about the dire warnings we had received about the condition of the road in. However, minutes after leaving the main east-west route, we hit the construction zone. However, as John had quite rightly suggested, the roadworks were far more of a problem for 4-wheeled vehicles. They found it impossible to avoid the large potholes, and preferred to use the sand tracks that wove their way alongside the main road. Whereas we, on 2 wheels, were easily able to steer between the holes and standing on the pegs gave us a stable platform, avoiding the worst effects of the uneven surface. 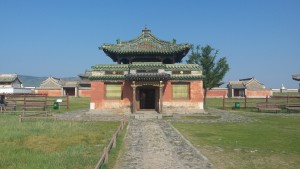 To be completely honest, there really isn’t much at Kharkhorin. Probably because Genghis Khan and his people were nomads, no evidence remains of his ‘capital city’. The town’s most notable tourist feature is the Erdene Zuu Monastery, known for the iconic ‘pepper pot’ ramparts that reinforce its walls. We stayed a couple of nights, took our photos, and left.