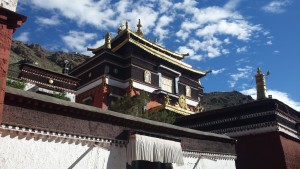 Monday, 22nd June: Due to the change in overnight venue, the ride into Lhasa was short at about 270 kms, and it also meant that we would be there for 4 nights rather then the planned 3. Accordingly, we started the morning with a visit to the local Buddhist Monastery. As with all of the monasteries, you are not allowed to take photographs inside. It must be said that one looks very much like another, that’s not to say they aren’t historic and picturesque, etc., but if you’ve seen one, you’ve seen most of them … 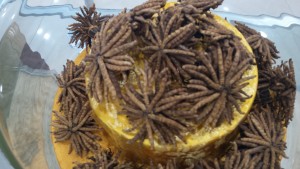 On the way back to last night’s hotel to change and collect the bikes, we wandered past the shops and took a look at some of the more interesting ones, offering such bizarre produce such as dead caterpillars in star shapes, wrapped in pretty boxes. I have to say that, although the thought of eating caterpillars didn’t appeal to me, they would have taken too much space in my luggage to buy as presents, so you can all breathe easier!

At 12 noon we left for Lhasa and arrived in dribs and drabs as some stopped to take photos at tourist attractions like The Dalai Lama’s Palace, sitting high above the city. Pleased to say that we were in another nice hotel with working facilities and a good car park, which helped us relax a bit, especially as we have now left the rough “home-stay” hostels behind us. I wonder if Kevin hasn’t got something up his sleeve to shake us out of our complacency though?!

It must also be said that our numbers have now begun to reduce as Misha, our Russian rider, left very early on Tuesday morning, by arrangement, having paid for our evening meal. Thanks Misha, it’s been fun. More of the group are also leaving during the week.