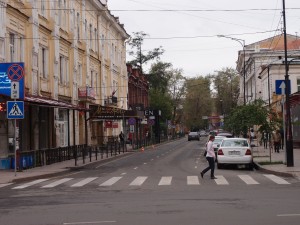 Tuesday, 14th July: My brief stay in beautiful Irkutsk got off to an ignominious start. Exiting the station, I was confronted with the usual throng of taxi touts at the station entrance. They can be quite aggressive, and my plan was to ignore them completely and find my way out to the taxi rank. Unfortunately, one of the more persistent ones caught me up and directed me to his driver. The car was a beaten up shit-heap, but that isn’t unusual. I asked the tout for the price. After all, that’s what the touts do – negotiate the fare for the drivers. This tout waved his hands dismissively and just said “taximeter, taximeter”. 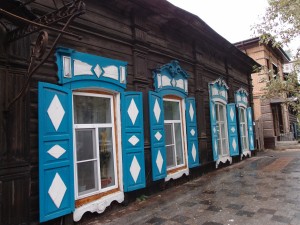 I really should know better by now, but he took my bag and put it in the boot and opened the door for me. He explained to the driver where I was going … and then got in the car himself! A small alarm bell went off in my head. Taxi touts don’t generally travel with the passenger. He asked if I minded if he smoked, and lit up before I had a chance to answer. I couldn’t see any evidence of a ‘taximeter’. So here I was, a foreigner with no Russian language, in what was presumably an unlicensed taxi, with two strange men. I took my folding walking stick out of my day bag and snapped it together as noisily and purposefully as possible!

The hotel was not a good choice. Thanks, Booking.com. It was in a housing estate, 4 or 5 kms from the city centre. The driver couldn’t find it and there was much checking of the address and the GPS before, in desperation, I handed the tout my phone showing the location in map view.

We stopped outside and the tout showed me his ‘taximeter’ – a dodgy-looking app on his mobile phone. 4,500 Roubles (approximately £50)!!! In English, I told them they had got to be kidding and that the cost of their taxi was more than the price of two nights at the hotel. It wouldn’t have mattered what I said. I could have called them a couple of thieving gobshites and all manner of other unflattering names, but they got the message that I was extremely angry. I opened my wallet and took out a 1,000 Rouble note. It was more or less all I had on me, and should have more than covered the ride. No. It wasn’t enough. I told them I didn’t have any more. They said they would take me to the ‘bankomat’.

There really wasn’t an awful lot I could do about it, as they still had my bag in the boot. So we went to a local supermarket and I drew out 7,000 Roubles (which I needed anyway) from the ATM. On my way back to the car, I made a great play of writing down the car number. The tout started protesting in a hey-what-are-you-doing sort of a way, waving his phone at me, “taximeter, taximeter …” “You can turn that off, right NOW!” I slammed my stick into the ground and had another rather public rant about their dishonesty. No one would have understood a word I was saying, but I was making a bit of a scene. The fare dropped to 2,000 Roubles, to which I reluctantly agreed. At least they took my bag out of the boot before I paid them. I was angry at myself. Since I’ve been back in Russia, I’ve encountered nothing but help and friendliness wherever I’ve been. I let my guard down for a moment at the station and ended up about 1,500 Roubles out of pocket. Still, it could have been worse. Much worse.

Feeling the need for English-speaking company, I logged into the Horizons Unlimited boards and asked for recommendations for ex-pat pubs in town. Within minutes I had a response from one of the members who was actually in Irkutsk, starting a ride to Bishkek in Kyrgyzstan with a mate … just as soon as their bikes cleared customs. They invited me to come and eat with them, so I asked the hotel to order me a taxi.

Following a very good meal with Paul and Daniel, I asked their hotel to order me a taxi back to the sticks. Now this was a perfectly respectable, professional, taxi driver – with a proper taximeter and all – but even he couldn’t find my hotel. When we did eventually arrive (after he phoned the receptionist for directions), I paid for the one night and said that I would be moving into a more central location the following day. I was sorry to do so, because the accommodation was very comfortable and the staff, though non-English speaking, were friendly and helpful, but I couldn’t be doing with getting lost every time I wanted to go into the city.

By midday on Tuesday, I was installed at the Victoria Hotel, just off Karl Marx Street, in central Irkutsk. By 2pm, the English-speaking receptionist had arranged for me to pick my motorcycle up from the railway depot first thing on Wednesday, and ordered a taxi to take me there. Things were looking up.

Wednesday morning arrived and I was duly collected and delivered to the freight depot. The warehouse staff took my paperwork and extracted the bike crate from the dozens of other crates and boxes that had, presumably, arrived on the same train. Remembering how solidly it had been put together, I did momentarily wonder how I was supposed to dismantle it on my own.

I needn‘t have worried. Intrigued by this strange English woman and her yellow motorcycle, two of the depot workers set about the crate with a couple of crow-bars. I produced a knife and sliced away the layers of cling film and, minutes later, the bike was free of its cage. My next problem was how I was going to get it down to street level. One of the workers went to fetch a fork-lift truck! But no. They weren’t about to move my bike with it. They simply moved some other freight that had been stacked in front of the shutter door, leading to the railway platform, and motioned me to roll the bike outside, pointing to a ramp at the far end.

Now for the moment of truth. Would it start? Don’t be silly. Of course it wouldn’t! I had barely ridden the bike at all since Denis had installed the new battery and, over the course of the last week or so, it had run flat again. With hand signals, I explained the problem. They gestured that they could jump start it with cables, to which, in turn, I pointed out the inconvenient siting of the battery underneath the fuel tank. We would have to lift it. A tool kit was produced from a back room.

A car was driven onto the platform and the jump leads were attached as well as they could be. I gave the starter another try. No. It needed a bit more charge yet. We let the car run. More people gathered on the platform. Suddenly, everyone was an armchair biker. Some had a few words of English. I explained that I was meeting my husband in Mongolia. “Mongolia?” “You’re going to Mongolia?” “On this bike?”” I like this bike.” “Skola mototsickle?” “How much?”

By the time we got the bike started, I probably could have sold it three times over!