Saturday, 1st August: So, after a brief hiatus in Gusinoozyorsk, John’s bike was fixed and, frankly, behaving a lot better than it had in a long time. We had to shave a day off our planned stay in Ulan Ude, which was a shame, but we stayed just long enough to enjoy a couple of pints in the Cherchill [sic] Pub on Lenin Street, and sort out our Russian motor insurance.

Since arriving in Moscow, I had been all too aware that I had no third party insurance. However, since I almost immediately decided to put the bike on the train as far as Irkutsk, I actually only rode it to and from Andre’s warehouse … and, a week later, when I arrived in Irkutsk, I confess I had forgotten all about it. Luckily, although Ken, Sam and I were stopped by the Police on the way to the Mongolian border, they were more interested in where we came from and how two Australians, a Canadian and a Brit came to be traveling together. Anyway, it was a situation that couldn’t continue, so John and I set about finding an insurer in Ulan Ude.

We tried Angara first but, having spent 200 roubles having our documents translated, followed by two hours sitting around in their stuffy fourth floor office, they told us that they couldn’t help because our bikes weren’t registered in Russia. No shit, Sherlock! It wasn’t all bad though. They did give us the address of Rosgosstrakh who, probably in part thanks to our translated documents, dealt with the whole thing in 5 minutes flat. After lunch, we packed the bikes and headed for Irkutsk.

I warned John of the long stretch of roadworks where I had dropped the bike on the way out, but Russian roadworks stop for no man and, two weeks later, the treacherous gravel had been replaced with a fresh layer of smooth tarmac. Hoorah! Alas, my relief was short-lived. It seemed that the whole of the rest of the road was now under construction and my heart sank slightly as, every 30km or so, we saw another yellow panel, indicating a new stretch of improvements taking place.

We stopped at a truck stop on the shores of Lake Baikal for a tea and a bar of chocolate. The Lake is a renowned beauty spot and I had hoped to get a couple of photos from the viewpoint on the road above, but it was shrouded in mist and, anyway, our delayed departure from Ulan Ude meant that we were running out of daylight. John asked me to step up the pace a bit, so I had a bit of fun on the twisties for the last 80km or so into Irkutsk and we arrived at the Hotel Matreshka in time for dinner. 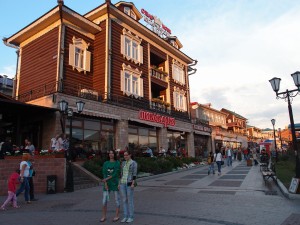 Funny how different a city can seem depending on who is guiding your visit. We asked the receptionist to order us a taxi to the centre of town so that we could get a meal. We didn’t specify any particular type of restaurant, but I assumed that the ‘centre’ would be somewhere around Karl Marx Street, where I had been staying last time. But, no. The taxi took us instead to the ‘tourist area’. Normally, I’d baulk at being directed to an area specifically dedicated to tourists but I’m glad I didn’t. The area between Ul. 3 Lyulya and Ul. Sedova is packed with restaurants that are as popular with the bright young people of Irkutsk as they are with tourists like us. We had a very good meal and walked back there for lunch and dinner the following day.

Eventually, it was time to move on and continue our homeward journey. I had booked hotels ahead for Tomsk and Novosibirsk but, for the next three nights in Tulun, Kansk and Achinsk, we would be relying on pot luck.

I checked my various booking websites and found that Tulun and Kansk didn’t feature. Other sources suggested that both towns did offer accommodation and, as we had discovered in Gusinoozyorsk, smaller ‘mini-hotels’ are often hidden away in apartment blocks and not advertised to tourists. In any event, Tulun boasted a promising-sounding ‘Central Hotel’, so it should be easy enough to find … 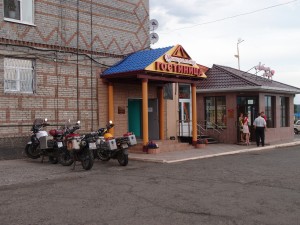 In fact the Central Hotel turned out to be exactly the sort of mini-hotel we have encountered before, occupying the second floor of an apartment block. The rooms were decent enough, with a fridge, kettle and television, and separate toilet and shower rooms being shared with the room next door, off a private hallway. A notice on the back of the bedroom door suggested that the café next door offered the best food in town, so we had a quick shower and went to investigate.

We arrived downstairs just as two German bikers arrived: a couple, Alexandra and Wolfgang. They parked their bikes next to ours and we got talking … as you do. In the meantime, a wedding party had spilled out of the café onto the pavement and, since I don’t suppose that Tulun gets to welcome too many foreign tourists, we became objects of much curiosity. Unfortunately, it goes without saying that the wedding guests were in varying stages of inebriation and things began to get out of hand as one of the more enthusiastic men made a grab for me and shoved his driving licence under John’s nose, making it quite clear he wanted to take my bike for a ride. I don’t think so, mate! It was all innocent enough, but still I found myself fending him off with the handle of my walking stick. Again! This is getting embarrassing. Eventually, the groom stepped in and your man was bundled away back into the café, loudly protesting his innocence. 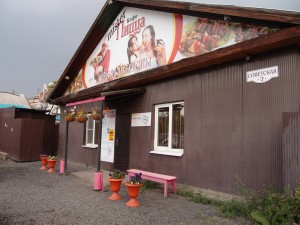 The wedding couple were at pains to excuse their guest’s behaviour but, unfortunately, with the party occupying the café, we would obviously have to find somewhere else to eat. John and I had done a quick reccie of the ‘High Street’ earlier, and the signs weren’t promising. But we still don’t understand Russia very well and hadn’t thought to investigate the back roads. The groom’s brother kindly escorted us across the road and up what looked like a farm track. Low and behold, there were two restaurants within staggering distance of the hotel: a pizzeria and a Chinese! John has had his fill of Chinese, so we opted for pizza … and very good it was too.

Kansk is rather bigger than Tulun, so we had high hopes for the Zaprosto Hotel, which had two good reviews on TripAdvisor. Alas, when we arrived in Proletarskaya Street, there was no sign of a hotel and, despite the efforts of several helpful passers-by, we never found it. In all likelihood it was, like so many others, hidden in an apartment block, but no one had heard of it. Instead, a helpful motorist led us to the Onix Hotel, itself hidden away behind iron gates, with no hint from the road that it existed at all. In fact, it had a spa and advertised rooms by the hour … so we were in little doubt as to its primary function. Nevertheless, the rooms were clean and comfortable, if a little airless, and the manageress was kind enough to find garage space for our bikes and call us a taxi to take us to dinner.

After much discussion with the manageress, the taxi took us to a swanky-looking restaurant on the outskirts of town, but it wasn’t what we had asked for. We asked instead to be taken to the ‘centre’. The driver seemed surprised but, hey, isn’t the customer always right? No. Apparently not. He dropped us off at the main square and gestured towards a café. Surely this wasn’t the centre of Kansk? Although the square was impressive, it was surrounded by dilapidated buildings and very few operational businesses.

John checked his phone for local eateries. There were two on the other side of the square. Both closed and boarded up. We walked a little further and saw another. Again, closed. I was beginning to think we had actually found the arse end of the universe. Then, just as we were about to give up and wander back to the café in the square, I noticed a sign advertising shashlik (Russian kebabs). They were good, but not quite enough for a meal, so we treated them as a starter, before going back to the square for our main course and beer, at the café we had been directed to in the first place!

We had, of course, no clue what we were ordering, but with one other diner being keen to practice her English and a good-humoured waitress, we were soon tucking into a tasty meal of … I’m still none the wiser. At the end of the evening, we went to the bar to pay, only to be approached by the sort of amorous drunk whom, wherever in the world I am, I seem attract with tedious regularity. Deep joy. Where’s my walking stick? Having failed to get any response from me, he wrapped his arm around John’s shoulders and took him into the foyer to have a quiet word. John didn’t understand any more than I did … except that he appeared to be being offered money for me. I don’t know what was the worse insult; the offer of money or the amount? 150 roubles (that’s about £1.50 at today’s exchange rate)! Luckily, my honour was preserved by some other diners who persuaded my admirer that this was not his lucky night.

Predictably, there was no breakfast on offer at the hotel, so we were quick to leave Kansk in the morning.