OK, so yesterday’s blog was a bit serious, but for me there is no more serious subject than war. That said, I will try and lighten the mood a little. As Brigid and I have found out to our cost, booking hotel rooms over the internet can be a hazardous operation. To date, the only issues I have had was yesterday’s, where they didn’t take credit cards and, as it has turned out, the hotel in Tambov.

I was aware there there were three mosquitos in the room there and thought I have dealt with them efficiently, if a little messily in one case! Sadly, as it turned out, they had got in first and I now have a few nice red lumps on my arms and neck to show for the encounter. And they itch, a lot, bastards!

So I went to pay the bill at the hotel, only to find out they don’t take credit cards and the bill came to 10 roubles less than I had in my wallet, and it was Sunday so the banks were closed and I don’t read Russian well enough to use the ATMs. Oh ******! Looks like I might get hungry today then, mind you I could still do with losing a little weight.

On leaving the hotel I thought I would give the bullet cam another go, and kept it on whilst I visited Pavlov’s House again and rode out of the city. I was pleasantly surprised to find out later on that it worked, the only problem is that I didn’t quite set it into the mount straight, so the video looks as if it was shot by Quasimodo! 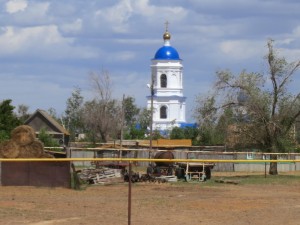 The roads for first 50 kms or so going south from Volgograd are really bad, for the most part. After that they are fine and so I then made good progress. The area bewteen Volgograd and my destination, Astrakhan, is very flat as far as you can see. The few trees seem to be a short stubby variety that offer little shelter from what seemed to be a constant, strong wind, although there was the occasional strong gust that did blow me across my lane. Fortunatly there is little traffic on the road. The whole region could easily be swopped with that part of Route 66 west of Amarillo and the only give away would be the amount of wooden telegraph poles holding up

the electricity cables and the single carriageway road – those, and some of the very ornate churches which stood in great contrast to the ramshackle, wooden or bare concrete block houses some of which must have been put up by the Church, as the fact that they remain upright is a miracle.

I made good progress and was saved the agony of not having any lunch when I filled up the bike for my second tank. I took the opportunity to have a bottle of water and a large picnic – healthy eating or what!

Tonight’s hotel is again nice and smart and boasts free WiFi, which was one of the reasons for selecting it.  That and it was put on the Horizons Unlimited board by someone who has, presumably, stayed there. Unfortunately, the Service Provider has taken a leaf out of the German MacDonalds franchise’s book, and they insist on sending an access code to a Russian phone. I though I had got round it by mentioning it to the receptionist who said I could use her phone number and she would let me know the code. Great stuff I thought. Sadly, the Russian ISP must have smelt a rat because try though everyone did, no-one could get me on to the internet. ******!

I did go for a walk to what passes for a high street and successfully managed to get enough cash to buy a couple of beers before exchanging some cash tomorrow. Just in time for beer o’clock, nice.

1 thought on “Gusty winds may occur!”