Well it was back on the road today; after a bit of a slow start I eventually left the motel at about 11.30am. It had been raining earlier in the morning, but it had cleared up and promised to be yet another nice dry warm day’s riding. Oh, how wrong could I have been!

All was fine and dandy until mid afternoon when a huge black cloud loomed large ahead of me. A quick look at the route on my Garmin showed that I was indeed going to go right underneath it. It was going to be a real test of my Klim jacket and trousers, not to mention my tank bag, for which I have no cover. Most tank bags have a cover provided with them, but not it seems my tank bag. Thanks, Wolfman!

When it started raining, it very quickly more than made up for the dry ride to date. Added to the dry dusty conditions anyway, I was riding through yet another set of roadworks. The rain was brown – such was the amount of dust and dirt being washed down the front of my visor. Even with the vehicles all displaying their lights, it was hard to see and I was virtually riding with my left hand contanstly trying to clear my visor. For all the good it did, I needn’t have bothered! 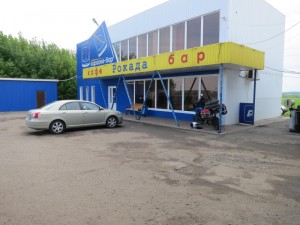 I lost track of the time I was riding under the deluge but, as always, it eventually stopped. I finally reached my goal for the day: Tambov. I should have stayed on the main road and not bothered going through town, whose wooden houses would have fitted nicely in an American Wild West town back in the 1800’s! I was beginning to think I was going to have a problem, and ended up asking at a fuel station for a motel on the route to Volgograd. Before you start wondering how I achieved this, just remember Google Translate is your friend! “Yes”, they said, “7 kms down the road on the left.” Sure enough, 7kms down the road was … another fuel station and a small coffee shop. Oh bugger! Oh well, thought I, I’ll have a coffee and ask in there. The only two people sitting at tables, a couple, showed an immediate interest in where I was from and where I was going – Google Maps is your friend (….. anyone detect a theme here?) – and, when I asked if there was a motel nearby, they just said yes and pointed at the ceiling!

It was a new building, very clean with tiles everywhere and, yet again, very friendly people. It turned out that the man was a director of the establishment, and yet again demonstrated the naturally warm, generous disposition that Russians are justifiably famous for, to the extent that when I left I was not allowed to pay for anything, not the room, not dinner the night before and not the breakfast. All I had been able to pay for was a bottle of water!

Another bonus for the day was the discovery that my Roadhawk Bullet camera does actually work. Well, I say “mine”; it was Brigid’s, but on discovering that mine had a lose connection we swapped them and I tested it out today. All I need to do now is to check when it is recording and when it it off. Sadly, my good intentions of showing how heavy the Moscow traffic is came to naught, as iot turned out that when I thought I was turning it on, it was already on … so I had turned it off. More profanities followed. You will just have to do with another … “Oh, bugger!”