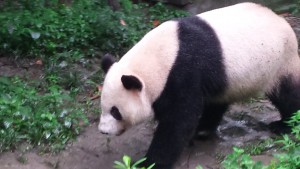 Friday, 3rd July: Thursday morning was a bit of a lie in for me and then looking after laundry and sundry other boring stuff. The afternoon gave us an opportunity to have a quick look around the city and have a bite to eat before heading to a Chinese Opera, the highlight of which was a very clever part of the show whereby the characters, who were wearing facemasks, contrived to change from one mask to another instantaneously. Although we think we guessed how it was done it was nonetheless a very clever show, but one and a half hours was definitely long enough. 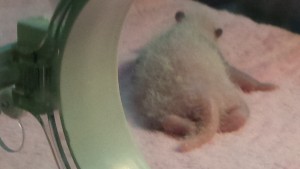 Friday morning we had an excursion to see the Giant Pandas at Chengdu Panda Research Centre, and were fortunate to see one tiny Panda that was less than 1 month old and so had not developed his black patches. He was being looked after in an incubator and was really sweet. The others were active enough despite the heavy rain and I certainly enjoyed the experience.

The afternoon was taken up preparing our bikes, and in my case my Garmin, for more miles tomorrow. I can do without getting lost again tomorrow, well, not lost exactly as we knew where we were, we just couldn’t find the right way to get to the hotel! In defence of Norman and myself, Chengdu is China’s 8th biggest city with a population of 14 million, so taking a little longer than planned to find the hotel wasn’t so bad, and at least I wasn’t last. Sorry Norman!