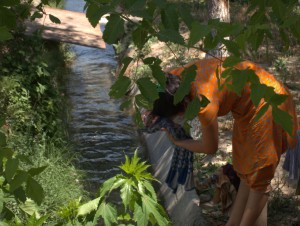 It was with a slight tinge of regret that I had to leave Samarkand. The reality of the place, and it’s exotic name, which had always brought back memories of the journeys of Marco Polo, hadn’t let me down. It was, along with Khiva, one of the highlights of the trip so far. After a chat with the receptionist, I was persuaded to give Tashkent a miss. By all accounts it was subjected to a very strong earthquake in 1980, which had all but levelled the place and it was rebuilt as a high-rise modern city, and I can see those anytime.

So, off to the border with Kazakhstan. It was yet another hot day. I really am not complaining. It will get cold soon enough with the promise of Tibet looming within the next couple of weeks, but I was probably not fragrant to be near, after 2 or 3 hours on the bike. The border crossing was par for the course, everyone was nice and helpful, but no-one knew what order things should be done in. I swear I did the same form 3 times at different windows. It was all rounded off by the customs officers giving my stuff a thorough search. “ Do you have guns?” “What?! NO!” “Do you have drugs?” “Yes, but only ones from the Doctor.” “Open up this box. Open that box. What’s in this bag?”. As it happens, this bag  contained my notebook and my RoadHawk Ride R+ video camera. The Customs Officer took a great interest in it, putting it together and taking it apart several times – it was only the day after that I realised that, either by accident or design, he had removed, and apparently lost, my 64Gb micro SD card. The only good thing that can be said was that I hadn’t taken any video footage since I had copied the last batch across to the notebook. Nevertheless, I now have to try and find another SD card. B****R!

Needless to say I hadn’t realised that I would lose another hour time difference, as I was now going on to Eastern Kazakhstan time, meaning that I am now 5 hours ahead of Brigid. My progress was a little delayed on the road from the Kazakhstan border by a metallic, rhythmical clanking. On stopping to see what it was, I found the metal sump guard, also kno 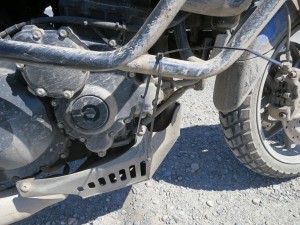 wn as a “bash plate” being held on by only one of the four brackets, the other three having failed.

Now in normal use, it’s not necessary for a bike like mine to have a metal sump guard. Indeed, the Tiger came with a plastic one that was there for looks only, with a void in the centre. However, on this trip, with all of the gravel and stones my front wheel has been throwing at the sump, it really is essential. Fortunately, I could temporarily secure it into place with well placed zip ties, but I will have to try and get a more permanent fix in Almaty. It was late by the time I got into Shymkent, but at least the hotel was there and they had space. I had time – just – to shower and get a bit to eat before retiring to bed. Exhausted.