Saturday, 5th July: Our stay in Chengdu came to an end with a 360 kilometre ride to Guangyuan, the majority of which had to be done on the one tank of fuel. It was doable, but a bit of a worry nonetheless. The countryside is much greener now and the roads still have a few high areas with some good bends on the hills and mountains. That said, there will be more and more built up areas the nearer we get to Beijing. It makes the riding less enjoyable and we certainly have to keep our wits about us with some of the other road users seemingly suicidal, and I certainly include the pedestrians in that comment!

We arrived at the hotel around the 5pm mark. It was another very smart and comfortable hotel, and I could certainly get used to this comfort. It seems the “homestays” are now far behind us but the memory of them makes us appreciate the better hotels even more. We were left with time for a shower and a brief wander around town before our 7pm daily briefing on tomorrow’s ride. It was then time for a bit to eat and an early night for another 350 kilometre ride on Saturday.

Despite dire warnings from Kevin on the humidity and heat, we have been lucky so far. It hasn’t really got too hot yet, but I am sure it won’t last. Sunday’s ride was another mix of mountain twisty roads and built up areas. We made good progress until we were stopped by some local police with warnings about roadworks on a bridge ahead. The only alternative route was via an Expressway, or motorway, but motorcycles are not allowed on them. We took our chances and, after 10 minutes or so, found the bridge, which had been newly laid with a dry concrete mix and had been covered with some cloth coverings to protect it. That, however, wasn’t the problem. It appears that a lorry driver delivering a load of girders and metal slabs for the bridge had got fed up waiting and just tipped them all over the road, blocking it completely. A team of workers were being very industrious in trying to clear them up, but they were heavy and had to be moved in a logical order to avoid a collapse of the “higgledy piggledy” pile. Fortunately motorcycles don’t need much space to get through, but it was still an hour or so before enough space was created for us to escape the log-jam. The roads either side of the blockage were very sandy with recent rains bringing a lot of sand down from the surrounding hills. The roads were also wet with rain and drizzle while we road along, so great care was needed to avoid coming off. 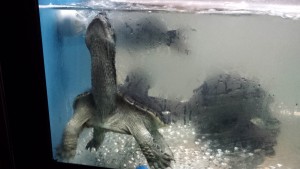 The hotel, in Fo Ping, was comfortable enough – although not up to the standard of the previous day or so and internet access was even worse than usual. The Chinese authorities are well known for blocking certain websites and their electronic censorship has the effect of slowing everything down to a rate which makes practical use of the internet very difficult. We ate in Chinese restaurant next to hotel being the apparent best option in a small town.