Wednesday, 1st July: Today we were due to go to Mount Emie, a World Heritage Site and a sacred Buddhist site. However, following a tunnel collapse, the route to get there was a lot longer than it should have been and the decision was made to go straight to Chengdu, where we were due to stay for two nights from Thursday. The result was a longer day’s ride than we should have had, but an extra day’s stop in Chengdu.

Due to the collapsed tunnel our route, of necessity, took us south before swinging North East to Chengdu. I left our overnight stop first, with Norman, and despite yet more road works and diversions, made good progress. Initially. I took it easy over a mountain roads covered with uneven concrete, taking care of my pannier mounts. All was going well and we were scheduled to arrive at the hotel in Chengdu around 6pm. 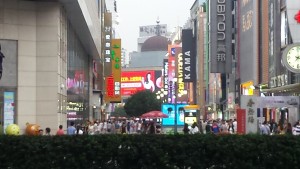 However, on approaching the city, Norman and I compared notes as to the routes our Garmins had suggested. Despite feeding in exactly the same co-ordinates, the routes and distances were completely different, mine being half as long again as Norman’s. We therefore decided to follow his. Suffice it to say it took hours to actually get the 12 miles or so to the hotel and very near the end Norman and I somehow got separated, so I arrived 5 minutes or so ahead of him after over 12 hours riding – two hours longer than it should have taken. 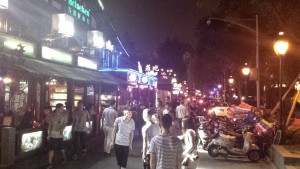 The rest of the guys, Kevin and Darran excepted, had gone into town to the Irish Pub called the Shamrock. A quick shower and change saw the three of us following suit, while Norman chose to chill out in the hotel. Needless to say, my arrival in the pub brought a huge, good natured, ironic cheer from the gang. I coped with a couple of Guinnesses but it can’t compete with the quality of Guinness at home and, in order to preserve my taste buds, switched beers.

All in all a frustrating day, but if everything went smoothly it wouldn’t be an adventure would it?