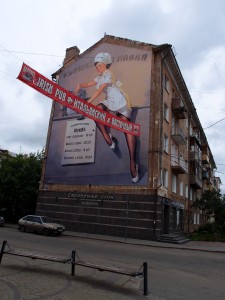 Sunday, 12th July: As well as picking me up from the station, Anastasia’s father used his connections with a local hotel to get me a good room with a view of the river. She came back a little later with her brother to give me a whistle-stop tour. While it might not be the most attractive of Siberian cities, it does have its share of history and a pretty old quarter boasting a number of designer shops. I wasn’t too bothered, though I would have liked to find a pair of shorts to replace mine that suffered a boating accident last weekend. Unfortunately, though, there wasn’t too much choice for the older (or larger) woman. Damn. I was quite fond of those shorts. They had got a bit big for me, but they were comfortable … and not too short. Maybe I’ll remake them when I get home. 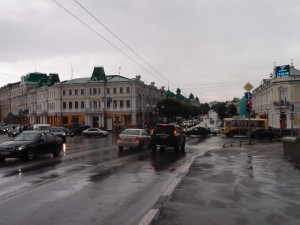 Before she left, Anastasia kindly helped me buy my onward ticket to Irkutsk. Frankly, I never would have managed on my own. I should have used the Internet. You might not get quite as much control over your accommodation (I wanted a female-only compartment), but at least the pages on the RZD website are logical and translated into English … and you can pay by credit card. Yup, you’ve guessed. I had to go and raid the ATM again. I wouldn’t mind, even, but the daily limit on most machines is 6,000 – 7,500 Roubles. That’s no more than about £75-£85 – not even enough to pay for the train ticket. It’s embarrassing when you continually find that you have no cash on you. I pointed out that I had paid for my train ticket in Moscow by credit card and was told simply, “But this is Omsk.”

My sight-seeing intentions were thwarted by the weather on Friday. I hung around the hotel, watching wedding parties pose for photos on the steps of the museum next door. It seems to be a tradition in Russia that the happy couple get driven around to pose for photos at well-known landmarks. Though John and I were delighted with our wedding photographs, the thought of having to spend a whole afternoon getting in and out of the car for them, not to mention all the fixing of make-up and hair that must go on would, I suspect, be grounds for divorce in themselves. I must be missing something.

Unfortunately, my train on Saturday was not due to leave until 10pm and I needed to check out of the hotel by midday. I packed my bag and put it in the left luggage room, taking the essentials (my documents, computer, and toiletries and a change of undies for the train) in my day bag.  I’d slightly given up on sight-seeing, but I wanted to buy some picnic food and I had promised postcards.

The picnic food was easy enough. I couldn’t find any Trail Bars to replace the ones from the UK, but I spotted what appeared to be the next best thing, ‘fruit batons’. The illustration on the box showed an appetising-looking bar, apparently containing apricots, plums and apples; along with which, I bought some salami (same word in Russian), water, and a selection of small pasties. 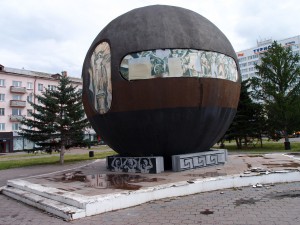 The postcards were more problematic. I tried various souvenir vendors but, despite showing them the word for postcard in the dictionary, none of them seemed to be familiar with the concept. The tourist office seemed to be my best bet, but the battery in my old HTC phone (now containing a Russian SIM) was almost flat again and gave me no time to interpret the directions. By pure good fortune I stumbled across the main post office.

The woman behind the stationery kiosk pulled out a smart pack of 10 assorted postcards and four pre-stamped envelopes. “Spaciba”, I said, “I’ll take the lot.” Five minutes later, having failed to work out the queuing system for the post office counters, I was back for stamps. The envelopes were, presumably, good for Russian addresses, but I felt sure that I would have to attach extra stamps for England. “Angliya”, I said, while miming a weighing action with the envelope. The woman looked at 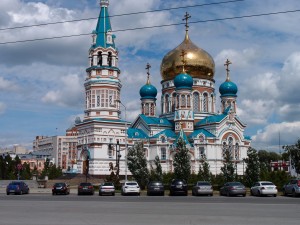 me blankly. I pointed at the pre-paid frank on the envelope. “Evropa”, I tried again. The penny dropped, and she went off to ask a colleague. Do I expect too much from people, I wonder? After a few minutes she came back and sold me four 13 Rouble stamps, one for each envelope. 13 Roubles? That’s about 2p. Seriously?! I have now forgotten how much the pre-stamped envelopes were, but I was sure that European destinations would cost more than 13 Roubles extra. I was powerless to ask anyone else, so we’ll have to wait and see whether they arrive.

I ordered a taxi to the station at 9pm and waited for the 242 to Irkutsk to come in. By that time, I had walked half way round Omsk and I was exhausted and fit only to climb into my bunk bed. I just hoped that I wouldn’t have noisy companions. I couldn’t be as lucky as I had been with Olga and Nika, could I?

I boarded at about 9.45pm and quickly found my place in Wagon #5, next to the restaurant car. There was only one other woman in the compartment, but she had made herself at home, spreading her luggage, magazines and picnic over every surface. She cleared the unoccupied lower bunk so that I could stow my bag underneath, and then I sat and waited for the carriage attendant to check my ticket and give me my bed linen, while my companion packed away the rest of her belongings.

As the train moved out, the carriage attendant duly appeared … with a man! Hadn’t I requested a female-only compartment after all? Oh, well. If Russians don’t mind mixed-sex compartments, I suppose I won’t have to either. I was confused as to which bunk he was taking, as he was already in possession of a pack of bed linen and was trying to stow the spare mattress and pillow from ‘my’ upper bunk. I got out of the way, so that he could lift the lower bunk, but my case was taking up the chest underneath so, with a few words of apology, he rolled up my companion’s mattress and bedding and tried her side. Already in her nightdress, she waited patiently in the passage, while he tried to put everything back the way it had been.

I was tired and getting increasingly frustrated. I just wanted to go to bed, but the carriage attendant called on the translation services of a young woman in the next door compartment. Her English wasn’t good, but it was a great deal better than my Russian. It transpired that the man was a railway employee and was only trying to help me make my bed. Oh dear. It was a kind thought, but he was quite clumsy and I really wasn’t in the mood. I asked my translator to thank him and tell him that I would be ok from here … Now there were only four people left in the compartment. The attendant checked my ticket and passed on various messages about the facilities on board and, in particular, the rules about using the toilet.

At last, job done, the carriage attendant went away and, with her, the girl from next door. The lights had been turned out apart from my companion’s reading light, so I brushed my teeth and got into bed. (Note to self: top bunks are provided for use of the young and athletic!) Suddenly, all the lights came on again by themselves. WTF?! Neither of us had stirred. I reached down to the switch by the door and turned them off again and closed my eyes. Peace, at last.

There was a knock. The door slid open and the lights came on again. Christ! What is this? I just want to go to sleep. Here was the carriage attendant, the translating girl from next door and a third woman, dressed in a sort of tea-lady’s tunic. The carriage attendant said something to the effect of “Sorry, were you asleep?” and the girl explained that the tea-lady had come to take my order for meals. Meals? “Yes, they’re included in the price on this train.”

The choices for breakfast, as far as I understood, were “porridge” or “eggs”. Since neither appealed, and I had my ‘fruit batons’ and jasmine tea, I declined. Lunch was “meat or fish”, and dinner was … “meat or fish”. I chose “meat” for both and went back to bed. Moments later, the door opened again. It was now close to 11pm and the attendant was selling souvenirs! To be fair, she did have a rather nice glass tea cup in a fancy metal holder bearing a pair of imperial eagles, and I needed a cup, so I asked how much it was. 1000 Roubles. “Niet, spaciba!” She closed the door behind her and I turned off the light again. 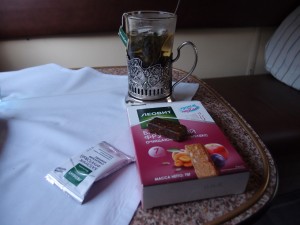 I don’t think I slept very well, but I must have dozed off at some point in the early morning as, when I awoke, I found my companion preparing to disembark in Novosibirsk. Now alone, and in a much better mood, I got up and went to buy a cup of tea – mainly so that I would have a cup that I could reuse. The attendant produced a teabag, so I mimed drinking from a cup. “Ah,” she said and, opening a cupboard, she handed me a smaller version of the souvenir glass tea cup and a teaspoon – on loan.

My ‘fruit batons’ need to be reported to the advertising standards people. Rather than a satisfying Trail Bar-style biscuit illustrated on the box, they turned out to be small lozenges of dried fruit that looked suspiciously like some sort of laxative. I tried one with caution.