I was up early and on the road by 8.30. It was a nice sunny day, with a cool breeze and I left the hotel – having double checked Garmin was showing the route I wanted to go. The road out of town was ok; not great, but nowhere near as bad as the last few days. However, once out of the city it was nice, smooth, tarmac. This can’t last I thought, my luck can’t be that good!

How wrong I was. The weather stayed sunny and cool, and the road stayed level with good tarmac. In fact, the last 20 kms into Beyneu actually had new tarmac and the quality of the surface was excellent. 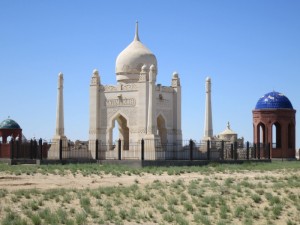 One thing I have noticed in Kazakhstan, is the number of mausoleums by the side of the road, away from any residences.  Some of them are really grand, while other less-expensive looking ones are, nevertheless, quite impressive. It is obviously a part of the culture and it is quite normal to see people paying their respects at any time of the day and day of the week.

I made such good progress that I was in Beyneu by 3pm and decided that I would spend a bit of time just driving around to try and find a decent hotel. The first one I saw looked ok on the outside and had a motel behind it. However, on riding up to the motel, I saw a police car and a second immediately pulled in fast to join the first. Now, they may just have been late for lunch, but to me it looked like they meant business! So, scratch that motel then.

I carried on driving around and after the third circuit had come to the conclusion that Beyneu is just a typical border town, with no centre to speak of. By now, the landscape had turned from semi-desert to three-quarters-desert and I saw groups of women sweeping sand from the side of the road into dustpans, presumably to prevent the town being over taken by desert. 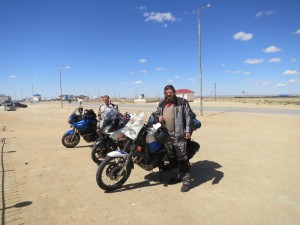 I rode back to the first motel and checked in. Like the town, it has little to commend it.  The room smelt musky and the décor was very late 50’s but, being the only hotel I could find, and at £20 for the night, it was better than sleeping on the bike! As I walked out to unload my luggage I met two other bikers: Sergey and Antun – Russians. Having exchanged pleasantries with Antun, who spoke passably good English, and taken photos, they decided not to stay. I saw them over an hour later still riding around and they were last seen heading back out of town. I guess they felt that sleeping on their bikes was a better alternative.

I’ll let you know tomorrow if I have caught fleas!