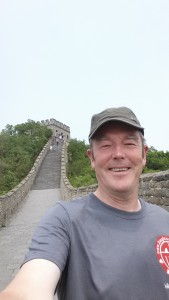 Wednesday 15th July: I was fortunate that after Sunday’s celebrations I, alone of the group, could afford to have a lie in. The rest were leaving at 9am to ride their bikes to the port at Tianjin, about 100 miles away, so that their bikes could be put into a container for shipping back to the UK. I, of course, was already bikeless, but was still up and eating breakfast by 9am. I ventured out a few hundred yards to visit Tiananmen Square, but decided it was just to hot and humid. So, after taking a few photos returned to the air conditioned comfort of Raffles Hotel, our luxurious Beijing accommodation, where I caught up with the blog and looked around the shops in the afternoon. China is famous for producing cheap goods, but there was no evidence of that in Beijing!

Tuesday we all visited the Great Wall at Mutianyu. There are a great number of sites to visit the Great Wall and the one we went to was not the closest. That was a bonus as the school holidays had started and our guide Andy showed us photos of sites nearer to Beijing taken during the holidays. Just try and imagine the busiest shopping street you can, during the last few days before Christmas. That was what the photos showed, the whole wall and the approaches were absolutely crammed full of people and anyone with claustrophobia would have been terrified.

Fortunately, we had no such problems, and were able to take a leisurely stroll along the wall for a couple of hours although, it didn’t really need that long and my stomach started complaining before time was up, but I had already taken my photos and had seen enough.

We returned to Beijing in plenty of time to get ready for the last group meal of the trip, and what better meal to have in Beijing than Peking Duck at a local restaurant famous for its duck, and where you can see them being cooked in an open ovens. A great time was had by all and a number of short speeches were given. 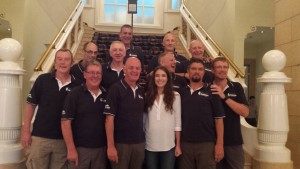 For my part, I want to express my thanks to Kevin and Julia Sanders of Globebusters, without their agreement to us joining them just for the China part of the ride, I would not have achieved to goal of “Inagh to China”. For that, I will be forever grateful. In addition, I had a wonderful time and learnt much about riding in adverse conditions, not to mention the fantastic mud bath facilities! Their team of Darran and Alan were very supportive and great fun, to boot. I must say that before joining up with the group I was worried about joining them half way through. However, my fears were all groundless and every one of the people on the ride was friendly and helped to make the ride a unbelievable experience. There are times from that ride that will stay with me forever. Thank you, one and all.

The following day, Thursday, was spent recovering and wandering around the shops and was an anti-climax for most. The majority were flying home over the next few days, although Stuart was staying for a week and his wife was joining him for a holiday. However, I was getting really excited. The following morning I was leaving for the border with Mongolia and a reunion with Brigid after over 9 weeks apart. It was the start of a new ride for me, the ride home with Brigid, and I just couldn’t wait!