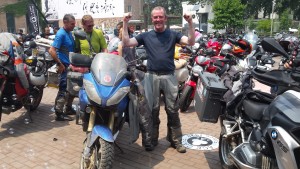 Sunday, 12th July: Ok, so I have had a bit of a break from blogging, especially as Brigid has now started writing about her adventures in Russia. However, it would just not be right to leave you all agog to know how I finished up the the ride into Beijing – completing the “Inagh to China” objective!

So, we left Xian on Thursday 9th and had three long days on the road. Although the actual distances were not too bad at between 250 and 300 or so miles per day, the nearer to Beijing we got, the heavier the traffic got and there were, of course, yet more roadworks and crazy Chinese drivers. The weather also decided to warm up and it got very humid. Consequently, by the time we reached the hotel in the evenings, up to Saturday, everyone was hot and sweaty and most, including me, were in desperate need of a beer or two. Following the shower, it was usually time for dinner and the long day took its toll, so an early night followed. The hotels were nice, but little time was left to see the area outside the hotel.

Then came the big day. Sunday 12th July. Arrival in Beijing. Three and a half years of planning, all leading up to one day! We rode in one convoy of 10 bikes, one support van and two Minis. The Minis shared the job of filming us, whilst zipping in and out of the traffic ahead and at the same time using a very clever drone carrying a camera, thereby getting some amazing overhead shots of us riding. We had around a 100 miles to go to get to the official opening of the new Ace Cafe in Beijing. That’s what the Globebusters ride was, “Ace to Ace”, i.e. Ace Cafe London to the new Ace Cafe in Beijing. The owners of the Ace Cafe in London flew out for the event, having seen the riders off from London’s Ace. 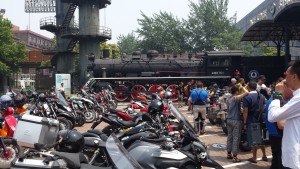 We arrived just after 12 noon. We knew there was going to be some sort of arrival event, but had no idea just how big it was going to be. I must confess that I was a bit sceptical about that, but I couldn’t have been more wrong. We rode along, having turned off the main road and pulled alongside the car park of the Beijing Ace cafe. 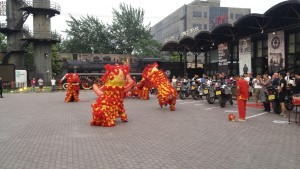 There were a huge amount of motorbikes and a great crowd to welcome us with a ticker tape machine and a great roar as we were signalled to ride in to the front of the cafe one by one. I had been feeling a little bit emotional prior to the arrival, but the excitement generated by the crowd and the loudspeaker introductions, followed by the champagne shower made me forget all that, and the excitement took over. It was a fantastic reception and not a moment I will ever forget.