Having left Inagh on 26th April, my trip has ended some 500km short of Moscow, following an innocuous fall on a sandy road, in which I carelessly broke my left fibula. After much soul searching, we have agreed between us that John will continue the ride – meeting up with the GlobeBusters group in Naryn, Kyrgyzstan, as planned. This, then, will be my first and last ‘ride report’, before handing over blog authorship to John.

The first section of the trip was destined to be a fairly fast blast up to Moscow, stopping en route in Warsaw to collect our Uzbekistan visas. It might be fair to say that, for me, the auspices were unfavourable from the start. We came off the Rosslare ferry in Cherbourg at about 2pm on Monday 27th and I immediately discovered that I had lost my passport somewhere on the car deck. A few minutes of blind panic ensued.

The passport was quickly found and returned, but 100km down the road, I became aware that my phone was also missing. More panic. However, before calling Vodafone to cancel my SIM, John sensibly suggested that I call my phone to see if it had been found and handed in. Imagine my relief and surprise when we heard the familiar ring tone coming from somewhere under the bike. The passport and phone had, in fact, dropped out of the same pocket while we were loading the bikes for disembarkation. The passport had landed on the deck but, unbelievably, the phone had lodged in the belly pan of the bike.

The ride from Cherbourg was otherwise uneventful, but further problems ensued when I discovered that my GPS unit wasn’t charging.  Given that John’s slightly older system didn’t recognise our address in Vilnius, and I’ve never been a great fan of GPS anyway, we eventually arrived at our (admittedly lovely) rental apartment, late, tired and not in the best of humour. 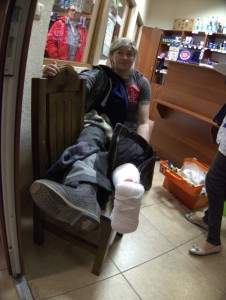 It just seemed to be one small thing after another and so, when I picked myself up after that fall, the fact that I could only change gear by hooking the plastic moulding of my boot heel under the lever, told me that I – not the bike – had developed a serious mechanical fault. Riding was ok, to a point, but any attempt to put weight on my left foot resulted in agonising pain. So much so, that when we pulled into a fuel station and accidentally stopped at a 92 octane pump, there was absolutely no way on earth I was going to risk moving the bike across the forecourt to another. Luckily, I held it all together until we arrived at the hotel, by which time my body had had enough and I collapsed in an embarrassing heap in the Reception area.

Now, if anyone ever tells you that most Russians speak a bit of English or that all road signs are written in both Cyrillic and Roman characters, you have my permission to laugh in their silly faces. You might find a plentiful supply of English-speakers around the tourist spots in Central Moscow and some of the major road arteries are sign-posted in both Cyrillic and Roman characters, but this is not the norm. Certainly, none of the dismayed staff on night duty had a word of English between them. Luckily, John had been talking to an English-speaking female biker called Nastya a few minutes earlier. A doctor, then an ambulance, were called and Nastya, John and I were soon on our way to the Emergency Room of Velikiye Luki General Hospital. 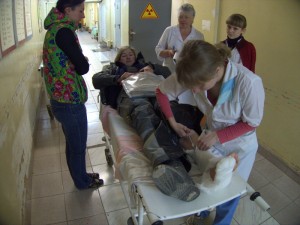 The ambulance driver (no ‘crew’ here) transferred me from their gurney onto a painted metal trolley that wouldn’t have been out of place in a morgue. This was nothing like A&E. As they wheeled me through a maze of narrow passages, I might have been the only patient in the hospital. I was certainly a curiosity. We stopped in a corridor, outside the x-ray department. Nastia explained the accident to the doctor, while a couple of nurses and a radiographer (all similarly dressed, so their function only became clear as my treatment progressed) removed the temporary splint and decided what to do about my motorcycle trousers. Although slightly woozy from a hefty dose of analgesic, I remember silently pleading that they wouldn’t take the scissors to my new pair of Klims.

It was all very quick and matter of fact. I was pushed into the small x-ray room, where, amongst a 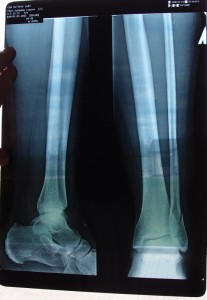 jumble of trolleys and assorted hospital apparatus, the radiographer positioned my lower leg under the business end of a portable x-ray machine and disappeared into an adjoining room. The machine beeped and she repositioned my leg for a second shot.

Back in the corridor, the doctor held up the plates and confirmed what I already knew. I had fractured my fibula. Nothing complicated. No operation necessary. But there it was. Literally. In black and white. The end of my Inagh to China Motorcycle Ride.