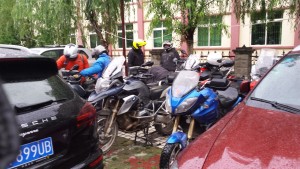 Tuesday, 30th June: The ride today was from Batang to Kangding, a ride of some 442 kms. By all accounts, 2 years ago there were a lot of roadworks so, hopefully, not too many bad sections.

We left at 8am and it must be said the initial climb was spoilt by my bike’s ignition light coming on near the bottom of the steep gradient. I was hoping that it was just a faulty switch, as Kevin, Alan and Darran were busy changing Wayne’s rear tyre, which was flat this morning, and they would have therefore taken a while getting to me in the case of a more serious problem.

By the time I neared the top of the mountain my bike had given up the ghost, and I ground to a halt on a rock strewn slope with little to go and examine while I awaited the cavalry. I confess I know little about motorcycle electrics that was likely to be of any use. I was fearing the worst, envisaging the alternator or regulator needing replacing, or burned out wiring requiring some major part to be shipped out and involving substantial work.

Sometimes, making silly assumptions like that can make us (me) look so stupid! In due course, Alan rode up a stopped by my bike. After explaining what happened he immediately said “It sounds like the battery connection”. “I haven’t heard of that coming loose on a ride before” I said, “Ah, but you haven’t done one of these rides before have you!”. Sure enough, Alan was spot on, the negative lead to the battery was very loose and explains why the horn was sounding a bit weird the day before, Lord knows how long it had been like that. A few short seconds later with the short bolt fastened again the bike roared into life and I must confess I planted a smacker in Alan’s cheek!

I was soon revelling in the Tiger’s power again, as it gobbled up mile after mile at over 4,000 metres like the real thing – closing in on a kill after days with no food in it’s belly! It felt so good having gone from near despair at the possible consequences of mechanical breakdown, to sheer joy at it being no problem at all, then ecstasy at the beautiful scenery whilst eating up the miles of long straights and slow curves. Perfect biking roads, fantastic!

That feeling though soon came to an end as we passed our third Chinese Army convoy and neared our destination, only to find that the road was, yet again, under repair. Having had three sections of the pannier carrier welded and the sump guard being held on by zip ties, I am nursing the bike along such sections of road as it sounds somewhere between a rusty bed spring and a metal ball bearing rattling in a tin can. It is a bit frustrating. However, we eventually entered the town, only to find the road down to our hotel was changed to a one way street, the wrong way. Just imagine then, my horror when Garmin told me that it would take another 184 kms to get to the hotel, rather than the 4 kms it should have!

Needless to say, Garmin was wrong. Again. A little bit of creativity, a little bit of riding on the foot pegs, and a little more than the original 4 kilometres, but we arrived. Kangding is virtually two towns in one. We have to ride through the newer part to get to our hotel, which was in the older quarter, fortunately. The new town seems a bit soulless whilst the old quarter is lively with restaurants and nice shops and lots of character.