Atyrau is a sprawling town whose economy seems to be based on the oil industry. Apart from that, there is little to commend it. I saw nothing worth the effort of sight-seeing, so I spent the morning sorting out my erratic Garmin – the little darling! However, I also thought it wise to check with the hotel receptionists about registering my visa, as I had just seen comments about it on the internet. They didn’t seem to know much but said they would find out.

As it happens, I went on the internet and found out for myself. OH BU**ER!

If I am in the country for 5 days or more, I have to register my visa and if I don’t I get fined when I leave the country. That means getting to the border (about 520 kms away) and out of Kazakhstan by Friday evening –  on roads of an unknown quality. All of the information I had read said it was partly tarmac and partly sandy gravel, the latter part being BAD. 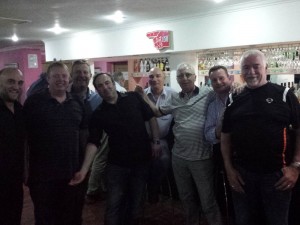 Now I have been messaging David Pickering, on a similar route but a few days ahead of me, picking his brains about how he was doing. For Atyrau, he recommended the Riverside Inn, frequented by ex-pats, so in the evening I had a pleasant stroll down the river to try and find it. As it turned out, there was a group of three Brits walking in the same direction and one of them was going there, so I joined him. On entering, there was quite a gathering as, apparently, one of them had “been let go”. Sadly, the falling price of oil is taking its toll of oil workers and, as is the norm, they get a month’s pay in lieu of notice and have to leave immediately as their visa is invariably cancelled. 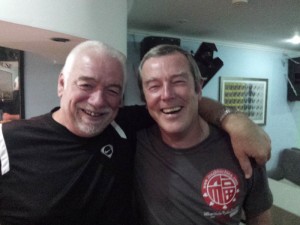 A number of the oil workers were bikers, and mentioned talking to David last Saturday. Unfortunately, no-one knew what the road was like as their bikes were at home, not in Kazakhstan. Never mind, they were a very friendly bunch. I had a very nice curry and a very pleasant evening, with great craic, was had by all. Thanks for recommending it guys!

It also turned out that the Riverside Inn, far from being full (according to Booking.com), was nearly empty. It has two buildings with just over a 100 rooms in each and only a dozen or so were taken, so there was plenty of room! Note to self don’t trust booking.com, just find the hotel through them, Google it and contact them direct.

I got a taxi back to the hotel, worrying about tomorrow’s ride and, being the skinflint that I am, concerned about being fined for overstaying.