Well Brigid took off today from one of Moscow’s 4 airports about 1 hours drive south of the city. After much discussion about how we were going to get Brigid’s bike home, the answer was remarkable simple. 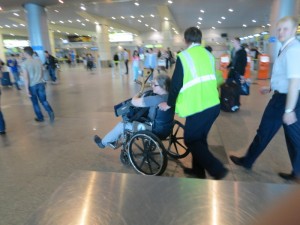 It turns out that when we completed the customs form on entering Russia, the official who dealt with us marked the form to the effect that we had to have the bikes out by 4th August. That means that rather than paying for shipping or someone to ride the bikes out of Russia, and risking them refused entry to the EU, Brigid can fly back to Moscow in July when, hopefully, her leg should be better, and she can ride it our herself. As the Easyjet flights are low cost, it is the cheapest option and has the added benefit that Brigid will get some sort of ride this summer after all!

That did help alleviate the sadness at seeing Brigid being wheeled through customs toward the departure gate, knowing that she was going to miss out on what should be a truly fantastic adventure.

The rest of the day was spent re-packing the remaining items that Brigid had not taken home. It turned out that she gave me just as much as I gave her t take home, with the upshot that I was still struggling to get a quart into a pint pot, hey ho!

It was back to the Honky Tonk Roadhouse, opposite the Night Train for dinner, and I managed to present a couple of small Irish flags to a group of bikers who were sporting “Irish Bros” on the back of their leather jackets. It seems that they are big fans of Ireland, and they were genuinely pleased to receive the token presents. Needless to say, in the spirit of true Russian hospitality, they had to present me with two specially selected wallets. Let me say at this point that the Russians and the Americans have much in common. They are warm, friendly, very hospitable, and generous to a fault, and they do a great job of selling their country as a place to visit.