So, knowing that the hotel wouldn’t be doing breakfast (on the basis that it didn’t have a dining room), I was up and out by 7.45am. A record so far on this trip! The road was good and the weather was cool, especially as we started climbing. I was making such progress that I hoped to be at the Silk Road Hostel in Almaty by around 10.30am. Fat chance! 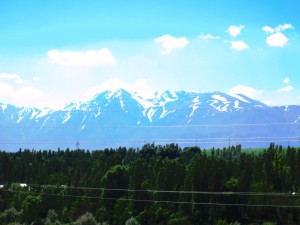 Off to the right of the road between Korday and Almaty runs a range of mountains which, I believe, are called the Ile Alatauy. In fact, the road from Shymkent to Almaty skirts a number of ranges. (You’ll need to remember these facts that I’m dishing out here as I will be asking questions when I get back!). I was aware of the mountains the day before, but it was hazy and I couldn’t really see much of them. Today, however, they were very visible, although taking a photograph would never have done them justice. They are beautiful and in a week or so I will be riding in them.

In the meantime, the land to my left and right into the foothills, was just a vast area 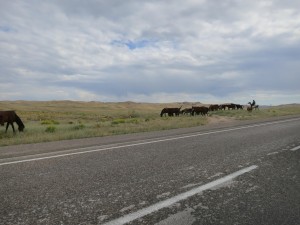 of grassland. Not rich, lush grass, but better than the desert that I had been riding through since I left Volgograd two weeks ago. As could be expected, the locals had herds of cattle and horses and goats, and they drove them with horses. It could easily have been the USA going back a hundred years or so. Apart from the goats, that is!

Eventually, I started hitting traffic on the outskirts of Almaty. Well, I say started hitting it, but that’s not quite right. I landed in the middle of an Almaty traffic jam! (See what I did there.) It went on for about two miles but completely disappeared after just one set of traffic lights. Sometimes I just despair. Nevertheless, it was another hour or so before I got to the hostel. It was clean, tidy and very well equipped. Perfect. They even let me put my bike at the end of the garden on an area of hard standing, inside a locked double gate.

No sooner had I got my bag of clothes out of the bike and changed, than one of the guys mentioned that he was going to register his visa – which was exactly what I needed to do. So I went along, bearing in mind he had been told that the office shuts for lunch at 1pm and it was now 12.30pm. We got there in time and I picked up two forms to complete just as it closed … for two hours.

An hour and a half and a few slices of pizza later, the crowd outside had grown substantially. There was no such thing as a queue. However, despite being quite a way back going through the door, I saw the man who had previously given me the forms, just the other side of an open window. Seizing the opportunity, I thrust my passport and forms at him. He looked at me, probably remembering my “yah ne pan-ee-my-oo”, and took the forms. He looked through them quickly, stamped one of them and wrote a note to return the following day between 5pm and 6pm to collect it. Perfect.

The other guy had been told before lunch to go back the same day at 5pm as he had a different problem, and had left. So now I had to find my own way back to the hostel, about 5 miles away. I had asked him for the address and he had kindly drawn a little map on which he wrote down the name of the big traffic junction nearby. Lucky for me, as the hostel was tucked out of the way!

There were no taxis to be seen, either moving or stationary, and I had no idea of what bus to get. So I waited, hopefully, at a busy junction. My plan worked as, within 5 minutes, a taxi appeared. There was already a passenger in the back. Nevertheless the driver stopped and I uttered the name of the junction and he said OK. That’s how it works here, if the taxi has space and sees another fare, he will stop find out where you are going. If it’s conveniently located, he will take you, if not, hard luck. My luck was in, so within 15 minutes of being in the middle of the visa registration queue, I was in a taxi back to the motel. Great stuff.

I got back to find all of my luggage, undisturbed, exactly where I had left it, including the tank bag containing my laptop and Bullet camera … strapped to the top of my bike at the end of the garden! Phew!