Tuesday 28th July:  As Brigid rightly said, there is nothing to see in Kharkhorin of Genghis Khan, sadly. Having seen the Erdene Zuu Monastery and wandered around the town, the next morning it was time to return to UlaanBaatar (UB). The weather was threatening to rain and sure enough as we left it started – not a good omen for the bad stretch of road ahead. But fortune favours the bold and, as we approach the bad 25 kms or so, the weather brightened up and we had a very pleasant ride back to UB, untroubled by the road.

We spent another couple of nights in UB before commencing Brigid’s trip: the ride home. The traffic was light and the weather and road were good as we headed north and that lulled me into a false sense of security. I found a couple of deep pot holes, one natural and one man made where the surface had been taken up in preparation for repair. The bike went right down to the bottom of the shocks and really clunked. At the time, I didn’t notice anything else wrong and we rode on to our overnight stop in Darkhan without further mishap.

The following morning, as I started loading the bike, I saw that the seat was not right, the front wasn’t nestling against the tank as it should be. I took it off to have a look and then saw that there was a break in the front subframe where it joins on to the real sub frame. This was a major problem. Without it being properly fixed, it was a trip stopper. We talked about our options and agreed that we had to get the bike into Russia, where we might have a chance of getting a temporary fix, a “bodge”, done. So off we rode, reaching the border without any further problems. 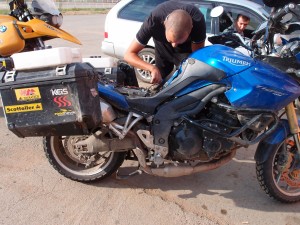 As usual the border took longer than it should, but we got through and off we went. But, as we rode, I noticed that the handlebars were getting further away from me. Not a good sign! Suddenly, first the left plastic panel, and then the right one, cracked, and the front ends of both came away from the front fairing. BUGGER! The handle bars were then even further away from me. Without looking, I realised there was a major, major, problem, and the only way I could possibly get the bike to even the next town was to stand on the foot pegs to try to keep the weight off the broken sub frame. So I did, for about 80 kms (50 miles), with Brigid riding behind me with her hazard lights flashing.

By the time we reached the first real town, Gusinoozyorsk, we were both just about out of fuel and had to stop at the first petrol station we came to. I took the seat off and was not surprised to see that both sides of the front sub frame, at the rear of it, had sheered completely. It was a nightmare. The end of the ride and, probably, a write-off of the bike. We were discussing our options as a local man approached, as often happens, and asked, in broken English, where we were going. I have to confess we were not very receptive, but tried to be patient. I pointed out that we had a major problem with the frame. He pointed to the rear of a bright orange building next but one to the garage, and said go to the “orange house”, where the man could fix it. We said that we needed to get the bike to Ulan Ude, thinking that we might be able to ship it home from there and where we could work out our options. We were polite, but clearly not receptive to his advice, and he went away without saying anything else. If he was unimpressed with us, particularly in the light of events, he was justified. It didn’t take long to come to the conclusion that there was nothing to be lost by going to the “orange house”, so we slowly rode around to the front of the building. 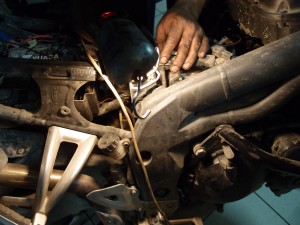 It wasn’t a house but a factory unit. A big one, with sign outside that read, in Russian, “Auto Tech Centre”. Maybe the man was right, I thought. A couple of guys were outside, so we got off our bikes and gestured that my bike was broken. The doors were opened, I took the bike in, took off the seat and showed them the damage. They immediately started chattering away and mentioned Argon welding. Without any formal agreement to do the work, or an indication of the cost, one guy immediately started stripping the bike down and within a hour it was down to the subframe. At this point I mentally hoped that he knew how to put it all back together, but realistically knew that if he couldn’t fix the break it really didn’t matter! By now, the guy doing the work was busy cleaning the broken surfaces with a powered wire brush.

It was now around 7pm, and we knew we were there for the night. We asked them if they knew of a local hotel. Their response was two fold, if we were prepared to stay for the night it meant they could do a better job, and yes they knew of a local hotel. We were taken there with just the stuff we needed, whilst Brigid’s bike was brought inside the big, very well equipped workshop. To call it a garage would be selling it short. 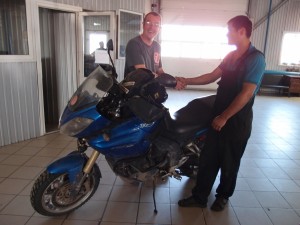 We didn’t sleep very well that night, worrying about what the morning would bring. By the time we got back to the workshop in the morning I was a bit frazzled. We walked in and there was the bike, being put back together. We were shown the welded sub frame and I was absolutely amazed, it looked like new. There was no sign of any different metal, it was very clean, just like a new sub frame would be. It seemed very strong, like new. Perfect. Even better, the welder showed me the pannier carriers and indicated that he had also welded them. They were more solid than they had ever been.

We were ecstatic, I was in seventh heaven, the ride was still on! Yet another low to a real high in less than 24 hours, someone “up there” really must be looking after us.