Well, there are no flies on me, or fleas either for that matter – thankfully! So, today I have to leave Kazakhstan or get a fine for overstaying and not registering my visa. I was on the road by 8.30am, hopeful about the road ahead, bearing in mind the nice new tarmac into Beyneu from the north.

I could not have been more wrong.

The road from Beyneu down to the border was the worst road I have ever seen, and that includes the Salmon Glacier road in Alaska! It is a mix of old, corrugated tarmac, hard packed sand and gravel, and mineshafts. I kid you not.

Many of the holes were so deep that my wheel would go all of the way in and the front suspension would bottom out. All of the vehicles on the road were swerving violently from side to side to try and avoid the worst parts of the road. That included the lorries, they were just doing it slower than the cars. The advantage of a motorcycle is that you only need one track, the rear wheel naturally follows the front. However, this can be a disadvantage, if one wheel goes in a hole, so will the other – with bone jarring consequences. Just imagine going over a speed bump too fast, sitting in the back of a heavily laden car, now multiply each individual bump by ten, then multiply that one bump by 93 kilometres. And these bomb craters were interspersed randomly across the width and length of the road. To be fair, there were places where the surface was manageable, but they weren’t very long, or very many. In other places there was a strip about 18 inches wide near the side on the road where it was level, relatively speaking and I could make good progress. That I managed to cover the 93 kms in just over 2 ½ hours, without dropping the bike or even having a skid was nothing short of a miracle! The bike did slide a little once or twice, but the new Goldentyre dual purpose tyres fitted a couple of day before seem to have been a brilliant find, I am very impressed, so far.

I eventually reached the border, got through the Kazak side in half an hour and then spent an hour in no man’s land, despite being ushered to the front by everyone else in there. Fat lot of good it did me. It still took 2 hours to do the small amount of paperwork on the Uzbek side. It’s not that they don’t know what they are doing, there is just no structure or organisation to it. It was very frustrating. Never mind, I eventually passed through the maze of windows and was given the golden ticket to escape.

First stop was the insurance booth which was mercifully quick, but I had to pay in Uzbek money and he didn’t do currency exchange. However, an opportunistic young woman who did was conveniently on my shoulder, literally. She was standing right next to me. Knowing that I was going to be staying at hotels, I decided to change $200, for which she offered me a carrier bag full of notes. I had forgotten that the Uzbek currency exchange rate is something like 3,000 to the dollar; £200 will make me near enough a millionaire! On hearing me exclaim “WHAT, I’m not taking that!”, she gave me a more manageable armful of notes that would get into my A4 sized zip wallet.

Next stop Kungrad, from where I could get to the south end of the Aral sea. But first I had to get there, and it had rained, hard, while I was going through the tortuous processes in passport control and customs. I was concerned that I would have a muddy, flooded road to contend with. However, although it was wet with puddles, it wasn’t that bad, relatively speaking. The puddles could hide big holes and road wasn’t great in places, but newly informed by the road down to the border, it was OK! 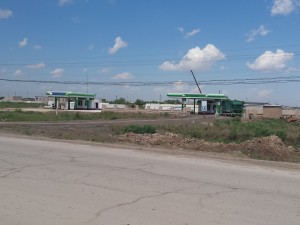 Nevertheless, by the time I got to Kungrad, I was running out of fuel and light was fading. I found the place I was hoping to stay but it was closed. The first two garages only had deisel. At the third I struck lucky. They had petrol; only 80 octane, but it would do. I asked, hopefully, “Hotel?”, “No”, “Where?”. The reply came in the classic Gallic shrug. I gestured that I needed somewhere to sleep. The young man then had an idea, “Hotel!” and drew a map in the mud of how to get to one. Now the problem was that I had no idea of scale and didn’t want to riding around aimlessly in the dark, but I set off to find it anyway. I didn’t find it, but I did find somewhere to eat and by sheer chance selected what must be a typical dish here, which is mince meat with chopped potatoes and carrots in parcels of what passes for pastry. By now it was dark and I had been concerned about my lights. However, the new dipped headlight was much brighter than the old one and the new auxiliary lights were brilliant! 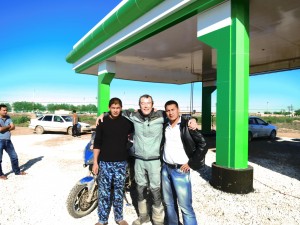 I found the garage again, and Jakesh and Bazik were good to their word, very welcoming and even offered my some of the very tasty stew that Jakesh had prepared. We managed to make ourselves understood and after an hour or so it was time for bed. I was given the office, the thin mattress wasn’t great but it was warm and was far better than sleeping on the bike!